These two hives are my standby strong ones. Mellona is entering her second winter. Bermuda is entering her third. She has barely made it through both of her winters, but perhaps this one will be the best one yet.

I've been worrying a little about Mellona. She has always looked weaker than Bermuda - less bees on the front porch and always looks a little on the low numbers side. Today there was brood everywhere - capped cells and brood in all stages of development. 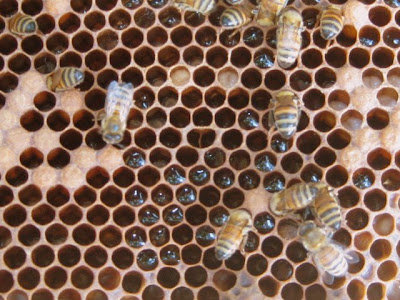 On this frame you can see five emerging workers - they're the bees coming out of the cells face forward. The nurse bees are going into the cells headfirst! 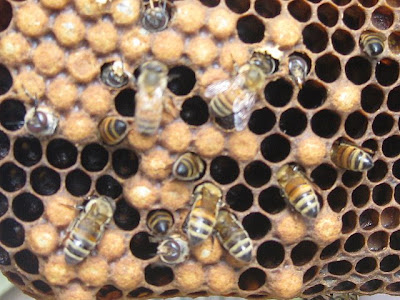 In the picture below you can see larvae in all stages of development. 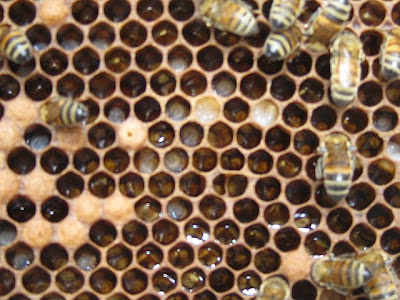 I was tired and needing to shower and go to work when I got to Bermuda so I only took this picture. The brood is obviously still in process - so that's good. I noticed in Bermuda there are two boxes each of which had half of its frames filled with honey and the other half empty. On my next inspection I'll combine the two boxes.

The combination will be a little problematic because one of the boxes is a medium and the other is a shallow....this is the argument for using all the same sized boxes. I had to put a box on in a hurry when I was on my way out of town and grabbed a shallow by mistake since all of its frames were there. But next time around I'll put the shallow frames in the medium box and hope for as little burr comb as possible!

I just noticed the stick in the bottom left of the frame. I believe this is a box that I started with popsicle sticks as starters and the stick must have fallen out of the slot and been incorporated by the bees into the wax comb! 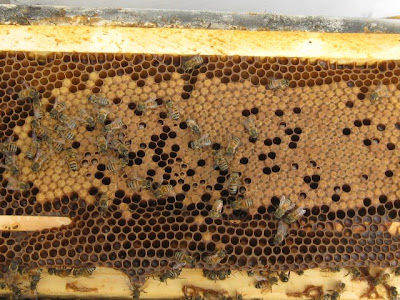