The Bees Found Me!

Today as I left for work, I noticed a swirling swarm of bees in my neighbor's yard across the street. I was running late and couldn't stop but I could see a plate sized pile of bees on the ground with others circling overhead and rejoining the group.

When I got a break in the day, I called my neighbor, Tom, and told him about the bees. He was shocked. He said he had been standing in that exact place earlier in the morning and there were no bees. I asked him to leave them alone and if they were still there when I got home, I'd put a hive box with them and try to retrieve them.

I called my local beekeeping guru, Cindy Bee. She said this was probably a hive that had absconded because of some problem like small hive beetles ruining their stores. Hungry and desperate, the bees leave the hive because of lack of supplies and lack of choice. She suggested that I set up a hive box with drawn comb and put it next to the pile of bees with a ramp of cardboard or cloth and that the bees would probably march right into the box.

At the end of the day, I drove home and looked over at my neighbor's house. The bees were gone. Oh, well, I thought, it wasn't meant to "bee." I checked my hives for signs of absconded bees but all of my hives were full and active.

When I get home at the end of the work day, the first thing I do is to let out the dogs. I opened the kitchen door and went out with Henry and Hannah. I was running with Hannah when I noticed the dish sized pile of bees in the center of my backyard.

The bees found me!

I did what Cindy suggested: I put out a medium nuc box, filled with drawn comb. I made a cardboard ramp and smeared a little swarm lure on it for encouragement. Right away the bees started climbing the ramp into the box! I had to go to a working dinner but by the time I left, they were steadily entering their new home. I have another box for this nuc - it's a medium nuc from Brushy Mountain - that I will add tomorrow. 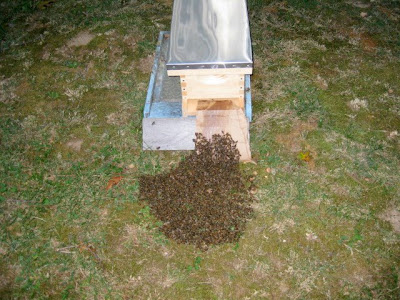 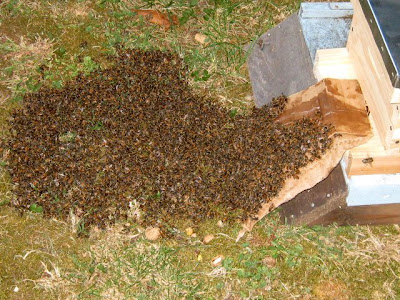 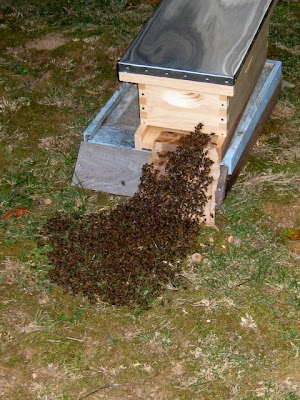 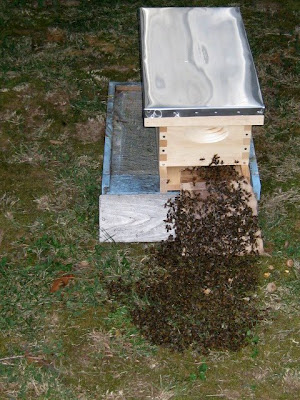 Cindy suggested that I feed them heavily because they are now in a hive with absolutely no stores. I mixed up 2:1 syrup and put it in a Boardman feeder on the front of the hive. I didn't think about stings and did all of this with bare hands and no veil. I only got stung once under the fingernail of my right index finger - and that was because I smushed a bee while moving them around to put on the Boardman.

I hope they live and thrive - I'll sure try to help.