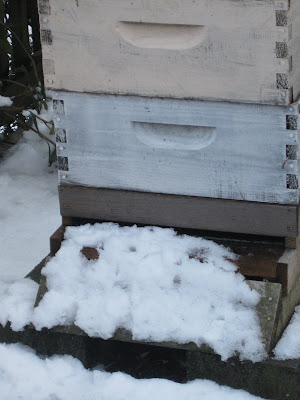 Over the weekend, it really snowed in Atlanta and was quite cold until midday on Saturday. Last night the temperatures were in the low 20's and it barely rose to freezing today. We are having one of the coldest winters that I can remember since I moved here in 1979. Although apparently my memory is skewed, because as an Atlanta Journal Constitution blogger points out, actually our winters are getting much warmer every year.

However, this one appears to me to be expanding in its breadth. Last year in February, it felt like spring. But not this year.

I came home from the Georgia Beekeepers "spring" meeting in the snow in Moultrie, GA, almost as far south as Florida, to find my beehives had snow on the landings.

I am worried about the bees. This late cold weather can result in dead hives - not from the cold but from starvation. If the cluster is not where the food is when the cold strikes, the bees will starve.

I am also worried because when we do have a bee-flying day (above 50 degrees), I work too late to see if mine are alive and flying. Cindy Bee suggested that I dust the landings with flour on a day forecast to be warm enough for flying. Then even if I don't see the bees, I'll see their little footprints to know if a hive were up and flying.

Of course, Bermuda, the hive pictured above that I am most worried about, uses a top entrance that they created from a bad shim and I won't see their little bee-prints.

The weather forecast looks as though it will be sunny, bee-flying weather on Friday and Saturday. I'll be on the lookout for flying bees.