I've seen a chipmunk under Mellona over the last several days. Today when I went out to open the hive for the first time in 2010, the entrance reducer had been pushed away. Maybe the bees did it in a Paul Bunyan effort, but I'll bet it was the chipmunk!

When I opened the hive, the baggie feeder of sugar syrup was still almost full. I put it on the hive 11 days ago. This says to me that they are not desperate for food, although I have not examined the boxes for provisions yet this year. 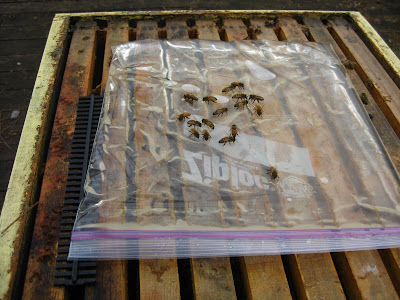 The hive looked small from opening the inner cover. The bees were concentrated on one side of the box. I assumed that probably meant the queen was in that area of the hive, so I expected to find brood either in the top or middle box on these side frames (2, 3, 4, 5).

In the past two winters, this hive has never moved out of the bottom box so I also was prepared to find activity and brood down there. However the bottom deep box that I have wanted to replace with a medium for two years was in fact full of empty-celled frames....not even any pollen stored there. I removed the box and will add a medium to this hive probably next week. 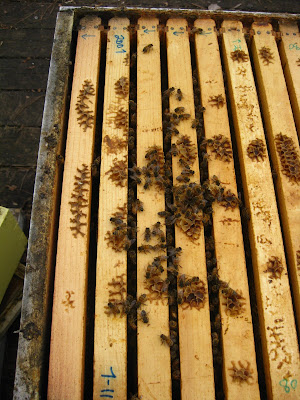 The top box had good honey stores still left after this hard, long winter, but I barely harvested anything from my hives last year. 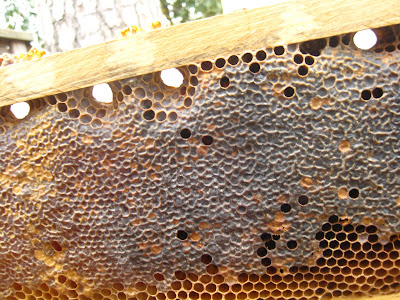 On the outer frames I found never-used comb - I don't think it's this year's comb but the end of their comb-building from last year. If it were this year's comb, it probably wouldn't already be dirty, but with all the pollen they have been carrying in, perhaps it is from this year. 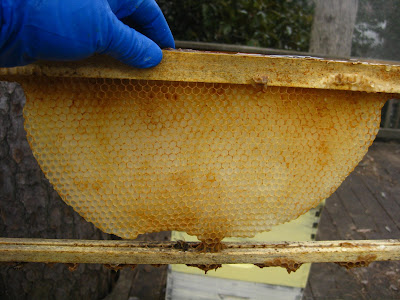 So Mellona is now an all-medium box hive! There were about 3 frames with capped brood on both sides. The brood area was small - about the size of a flattened grapefruit....but at least it was there. I saw some uncapped brood. The sun wasn't out, so I didn't see eggs although I tried and I didn't find Her Majesty - just evidence that she had been there.

Email ThisBlogThis!Share to TwitterShare to FacebookShare to Pinterest
at 9:24 PM
Labels: capped brood, Mellona, opening up the brood nest, spring