This hive started from a swarm I collected several years ago. It has always been a strong hive and has a fierce independence about it. I wasn't sure how well they were doing when I opened the hive today for the first time and saw all these dead SHBs on the tops of the bars. We have had a cold, cold end of February and I imagine they couldn't live through the weather.

This is the first year of my five beekeeping years that I am still seeing live SHBs in the hives. Usually they all die off during the winter and then reappear at the end of June. But they are alive in both of my hives - not a lot - the bees are managing them - but they are there. 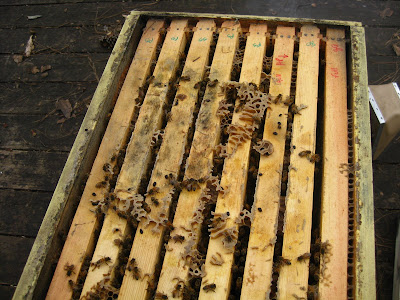 When I lifted the top box off of the stack, I found opened brood in burr comb between the boxes. I don't get why they did this. I felt bad killing all the pupae. 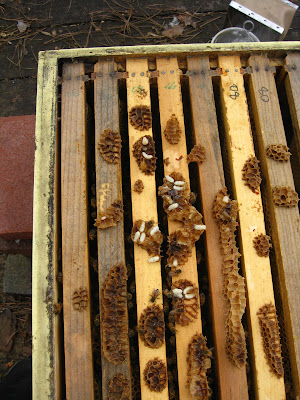 The brood pattern which was on about five frames looked about like the photo below. I could worry about the empty cells but I believe the queen started laying and was fooled by the weather. We generally are full into the warmth of spring by now and we had below freezing temperatures and snow just last Tuesday. So I think the brood didn't make it in the cold and was cleaned out by the workers.

Generally the hive seemed about three weeks behind this time last year (as did Mellona) and the brood area was just getting started. 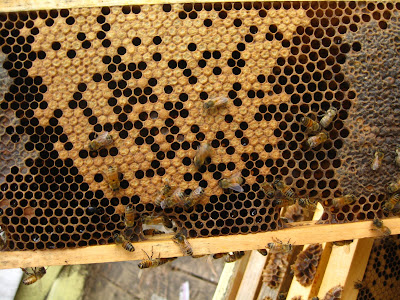 Then in the second box (there was nothing in the bottom box) I found Her Majesty! I've circled her in yellow below. I know the picture isn't well focused but I thought you'd like to see her. Next time I'll keep the camera on a tripod and maybe the focus will improve.

Most of the bees looked healthy, but the bee in the lower left is definitely a victim of Deformed Wing Virus. I've circled her as well so that you can see the wings (even out of focus, the evidence is obvious). 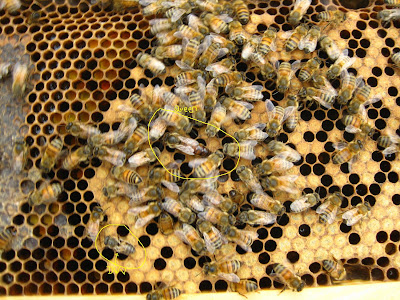