Aristaeus2 is a Queenless Hive

On March 10 I took this picture of the apparently lovely queen in Aristaeus2. I was so pleased to see her and to see that she was starting to build up the hive. 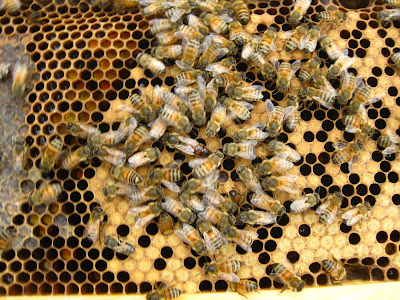 I've noticed very little activity in this hive over the past week. I'm not seeing pollen flying in with the bees and it's a quiet hive. This morning I decided to open it up. It's generally a quiet hive, so I didn't light my smoker and didn't wear gloves.

I was inspired to open it because this little clump of bees was on the landing, looking as if they were having a rather serious conference.

I opened the hive and a "queenless roar" went up. I was stung three times on my bare hands. I went indoors, got gloves, came out and lit the smoker. When I returned and opened the hive, there was not any capped brood - all empty cells. There was one frame with a saucer sized group of drone brood.

In despair (this was the hive I planned to take to the mountains), I opened Mellona and found a frame of brood and eggs. I shook all the bees off into the Mellona hive and brushed any clinging bees. Then I put this frame into Aristaeus2. This gives the queenless hive the resources to make a new queen, if they can. We'll see. I marked the frame so I could check and see if they have created a queen cell.

Meanwhile I think I'll try to find a queen to buy. 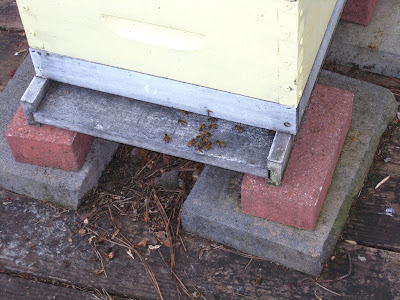 Email ThisBlogThis!Share to TwitterShare to FacebookShare to Pinterest
at 10:16 AM
Labels: queenless, queenless roar