It's Thursday and four days since I installed the package in the top bar hive. Before work this morning I went to my daughter's house to retrieve the queen cage and make sure that she had been released.

Since the first install, we took the legs off of the hive and lowered it onto cinder blocks to make the screened bottom less a source of open light coming into the hive. I provided these bees with two quart jars of sugar syrup in Boardman feeders inside the hive. I put old comb on the floor of the hive.

We had really strong winds here on Monday night. When I arrived, the top of the hive, despite being weighed down with three bricks, had been blown off of the hive.

I looked down into the hive and immediately saw a problem. It looked as though the bees had incorporated the queen cage into the comb. Being nervous, I proceeded not to think clearly. So I pulled the queen cage out, and 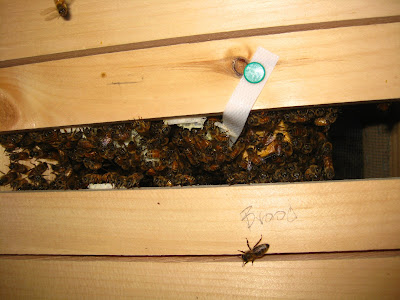 in the process pulled the new comb the bees had built out with it.

I should have (if I had been using good judgment) lifted the top bar, turned it over and used my pocket knife to cut the queen cage out. Instead the comb fell into the bottom of the hive where I could see another piece of new comb that probably had dislodged when the wind blew off the top. 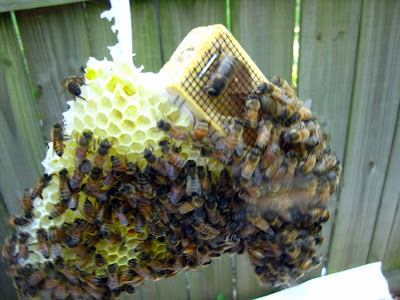 I checked and the queen had been released. I had some rubber bands and tried to rubber band the comb onto the top bars but it didn't work. I put all the comb in the bottom of the hive and went back to work.

At work I kept thinking about the mess. I had a 30 minute break so I went to Cooks Warehouse down the street from my office and bought kitchen twine. I figured it was 100% cotton and would be organic in the hive. I could cut lengths and tie the comb onto the top bars. I resolved to go to Valerie's at 4:30 when I was done for the day and repair the mess.

When I got to Valerie's house, once again, deja vu, there were NO BEES in the hive. I was so disheartened. I looked around and saw a puddle of bees on the ground about 15 feet from the hive. With bees swirling around over the puddle, it looked like a swarm on the ground.

I guess after I broke the only comb they had made, the queen said, "What kind of a place is this?" and abandoned the hive, but couldn't go far so she landed on the ground. 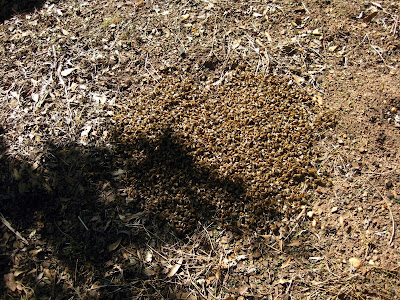 Since this is swarm season, I carry all my "catch a swarm supplies" in the car. I had a cardboard box with a telescoping top, I had duct taped #8 hardware cloth over the hand hold on one end and stuffed a pink bandana into the other hand hold. I had a white sheet and a plastic milk jug with the top cut off to use as a scoop. The box had two large pieces of old comb that had leaked honey into the bottom of the box. And in my hive tool bag, I had my bee brush and some swarm lure.

I decided to proceed slowly and think about whether or not to try to return these bees to the top bar hive. I began tying the old comb onto the top bars with the kitchen twine. I called my bee buddy, Julia. She introduced the thought that maybe this was a whole different swarm and not my bees at all! But I think these are Don's bees and just left the unsatisfactory living situation. 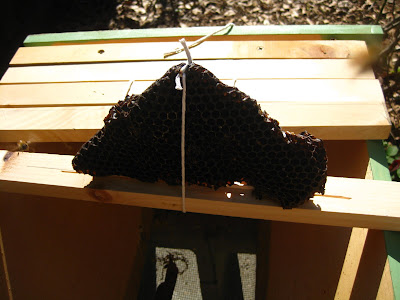 So I tied the old comb onto about six different top bars. I sorted through the top bars - all of them have glued in popsicle sticks for starters but about a dozen have bees wax dripped on the popsicle sticks. I found each of these and moved them to the bee end of the top bar hive. 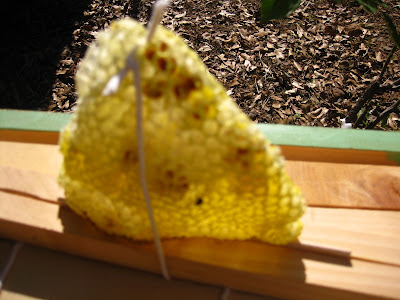 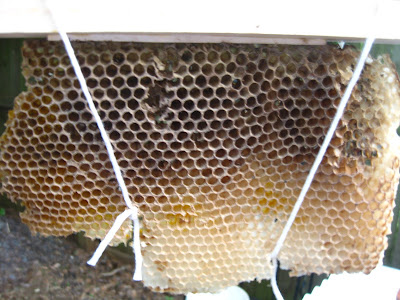 Valerie had a board leaning against her fence that was the length of the top bar hive, so I slid it under the hive, blocking the light through the SBB.  I had to readjust a little to account for the space this caused between the hive and the cinder blocks but I had a falling apart Langstroth frame so I pulled it apart and used the bottom and end bars as shims to level the hive. 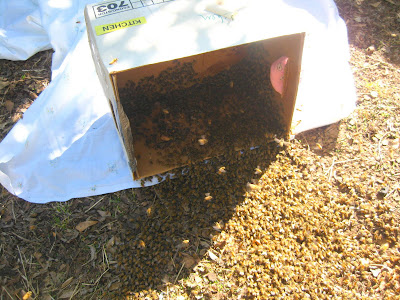 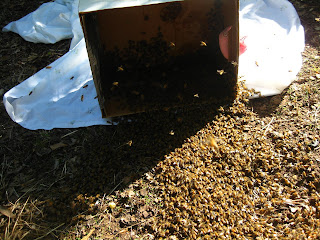 I put two milk jug scoops of bees into the box (on the sheet so I could see the bees not in the box).  I must have gotten the queen because the bees filed into the box in a stream after that.  I kept taking pictures because it is always so amazing to see the procession. 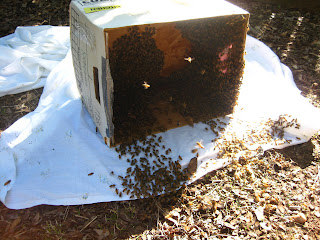 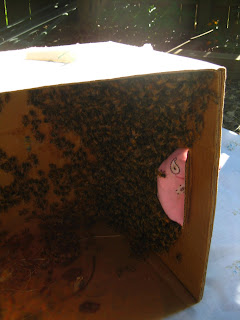 They all gathered in a clump around the queen, I assume.  When all but about 10 swirling bees were in the box, I put on the top and carried it to the top bar hive a few feet away.

Note, there are no taxes in the box!  You can see the pink bandana at the handhold and you can see the strings on the top bars where I tied in the comb. 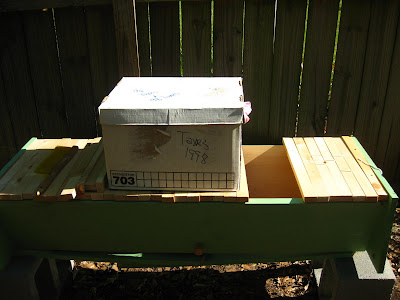 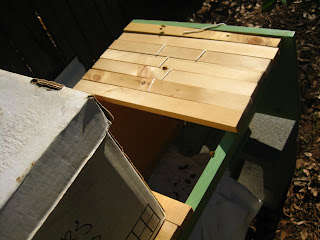 I opened the box and dumped in the bees.  I so want them to stay this time.


Julia reminded me that Internet comments on my last blog post about the failed swarm installation suggested that the beekeeper should put a queen excluder over the entrance to discourage the queen from leaving, but in all the stuff I did have with me, I had no queen excluder.  I closed the cork entry on the side to reduce the entrance possibilities (or for these bees, the exit possibilities). Then I closed up the hive and drove home in the horrible Atlanta 40 minutes-to-my-house traffic.

Once I got home I couldn't stand it.  I put the queen excluder in my car, a couple of bricks, and my favorite dog to keep me company and drove back to Valerie's for the third time today to do the last thing I thought I should do. 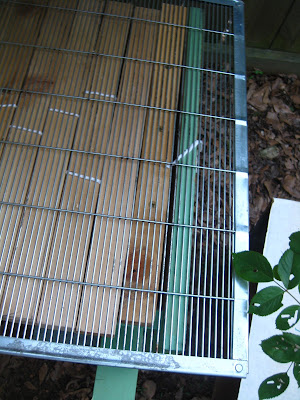 I laid the queen excluder over the entry.  Actually these are small cell bees, raised on natural cell size and the queen may not be defeated by this queen excluder, but I'll leave it on for a week.  It does serve to reduce the entrance.  However there is still this hole on either side of the end of the box (see the picture below): 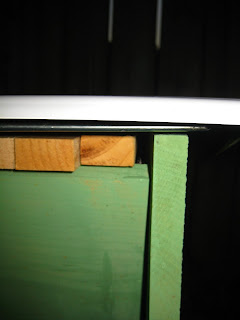 In the picture below, you can see the fence board that now runs the length of the hive, blocking the light and mostly closing up the screened bottom. 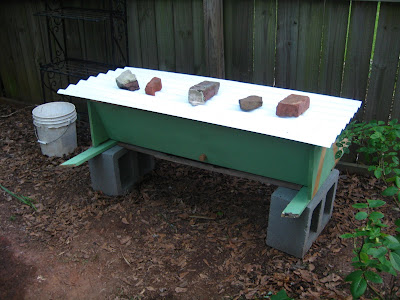 I put the top back on weighed down this time with lots of bricks and crossed my fingers.  Hannah (my dog) and I went back to my own house, and I will hope for the best.