Desperate for Reassurance, the Hive Inspection at Home is a Success

I only had about 30 minutes after the hive inspection at Blue Heron before I had to go to my daughter's house for dinner. I ran through the house to the deck, lit my smoker, and checked my hives for hope in my beekeeping life.  I was upset about Blue Heron and needed to have some kind of good news.

I opened Mellona first, my over-wintered successful hive. Inside I found several frames of brood and eggs. I only stayed in there long enough to see and then closed up the hive.  If you'll click on the picture below, you can see eggs and small larvae in the cells on the left. RELIEF! This hive appears to have enough to share, so I could take a frame of brood and eggs from them for the Blue Heron hive. 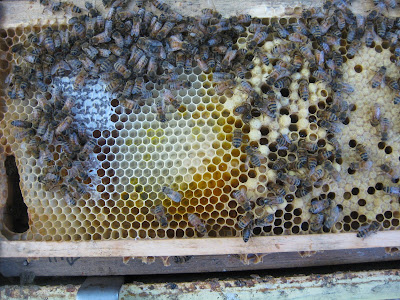 Here's a close-up of the larvae in the cells in this hive. 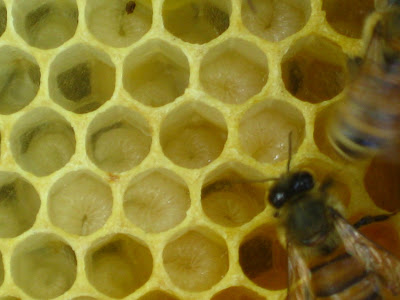 Below is another view where you can see eggs in many cells. 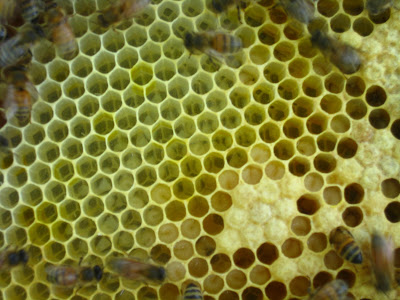 Then I opened up the swarm hive to find that they were building this beautiful wax in the brood box. They also have completely filled a box of honey. I plan to give them another box tomorrow. I didn't have time to look extensively, but they have brood and eggs as well. 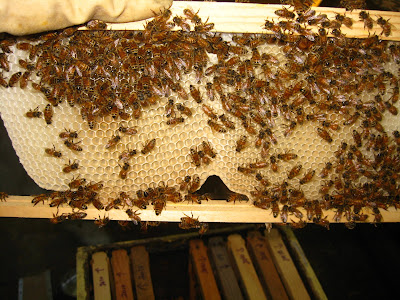 Finally I opened Aristaeus2, the hive that I gave a frame of brood and eggs to on April 5.  It's the 18th and they have made a beautiful queen cell from that frame.   The queen should emerge in the next day or two.  She'll spend a few days getting used to being alive and then she'll fly off to mate, hopefully successfully.

So tomorrow I'll put a new honey super on the swarm hive and I'll give another frame of brood and eggs from Mellona to Aristaeus2 just for insurance.  Maybe if things work out at home, I can get them to work out at Blue Heron as well.

Email ThisBlogThis!Share to TwitterShare to FacebookShare to Pinterest
at 10:55 PM
Labels: adding frame to queenless hive