My sweet friends Gina and Phillip captured and swarm and offered it to me for my top bar hive. I was so excited, but when they called me I was at the symphony. We decided that I would get the swarm at their house at 7:00 AM the next morning to take it to my top bar hive.

Meanwhile, the top bar hive is still in my carport and not where it is supposed to be at my daughter Valerie's house. At intermission at the symphony, I called Valerie and Jeff and told them that they needed to get the hive to their house. Jeff went at 10:00 PM after his class and took the hive legs off to transport it to his house.

The next morning Gina calls me so excited about these bees. It's a huge swarm and they have captured it by hanging a nuc box in a tree. Before the crack of dawn,Gina in her p.j.s, and Phillip in his apron, climbed up and retrieved the box. 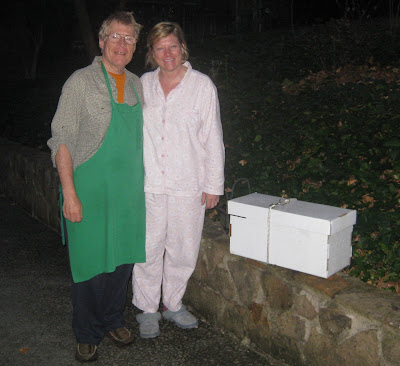 I needed to get the swarm installed before picking up my grandchildren at 8:30. I drove to Valerie's house to find the top bar hive waiting for me. 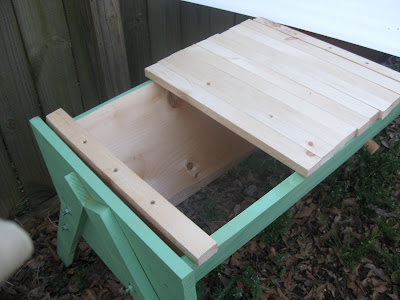 The cardboard nuc box is sitting on the ground waiting to enter the new home for the bees. 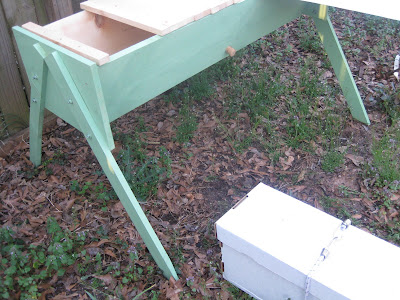 Phillip had guessed this was a 4 - 5 pound swarm. When I opened the box it was totally filled with bees. 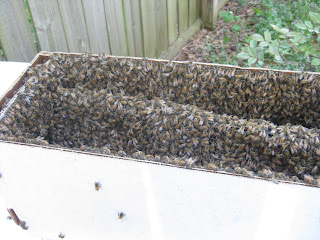 I dumped the box in and the bees didn't go to the screened bottom.  They didn't look particularly comfortable and I was stung four times in the process - once on my finger, three times on my leg (they went up my pants leg).  I also had a bee inside my veil the whole time. 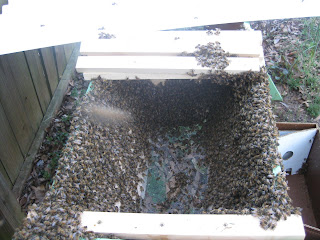 Nonetheless, I closed up the top bar and went home.  The next morning I went to Valerie's to have breakfast with them.  We walked out to the hive and found that the bees were totally gone - only a small clump of ten bees remained.  The swarm was so strong that they had pushed the top bars open about six inches to provide a hole through which to leave.

I returned Gina's nuc box to her and just wanted to cry.  It was such a great swarm and she was so sweet to give it to me.  I hope she'll get another and keep it for herself.

I don't know why they left.
Hypotheses:
Plan going forward: 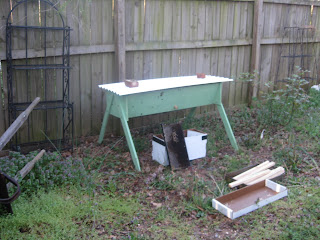