I had the privilege to stop in Lula, Georgia at Don Kuchenmeister's lovely beeyard to pick up two packages on Saturday. It was raining cats and dogs. Don had a ton of bees in his basement. I asked him to pick my two packages. Here he is holding the two packages of bees. 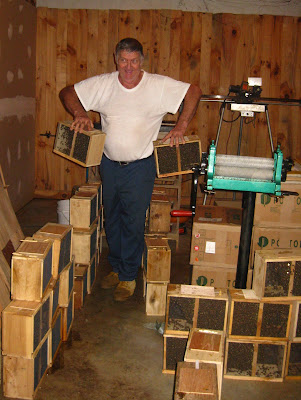 I've had a couple of telephone conversations with Don. He is a gem of a beekeeper. He colors outside the lines. He has lovely bees. These bees were so calm and easy to install. I want to go up and spend some time with Don. He only lives about an hour from my house and he's right on the way to my mountain house, so you can rest assured that I will be visiting him again.

BTW, he had PINK nuc boxes in his beeyard. His beehives were in a pine grove and he was about to go to work the hives in the RAIN. He's quite the renegade beekeeper, and I'd love to learn more from him. 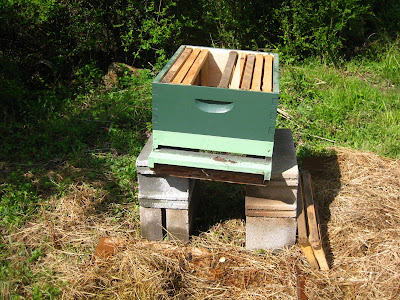 I drove to Rabun County where I was supposed to install the bees and then give a talk to the community gardeners. However, the weather (part of the system that spawned the tornado in Yazoo City, MS) was in Georgia all day yesterday. I gave my talk to the gardeners (Meet the Bee, I called it!), but I couldn't install the bees until this morning.

Today I set up the hive box and took out two frames in preparation for the installation. I've, BTW, never installed a package in my beekeeping career. So I was a little nervous.

First I sprayed the bees (who spent the night in the basement of my mountain house) with sugar syrup. They immediately calmed down. 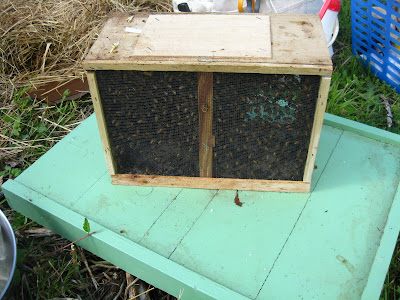 I wasn't sure if the queen cage was secured so I put a tack in the tape that secured it.  I've seen videos on the Internet with the beekeeper dropping the queen cage into the bottom of the package as he/she lifts out the syrup can.

Then I pried up the thin piece of wood serving as a top. 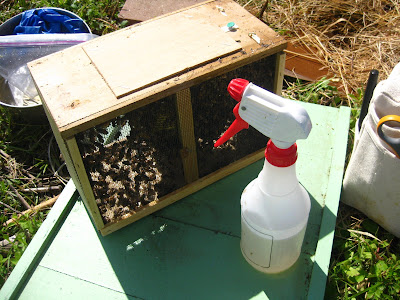 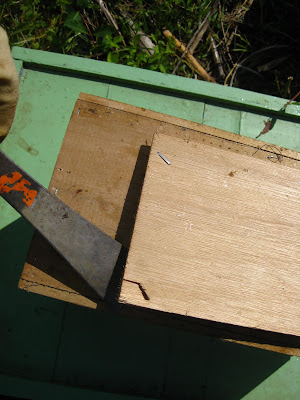 This wasn't the easiest thing I have ever done - it was hard to pry up the staples.  But I succeeded.  Then I found that the queen cage was also stapled.  I have an Italian hive tool which has a curved end, perfect for prying up the staple in the tape holding the queen cage. 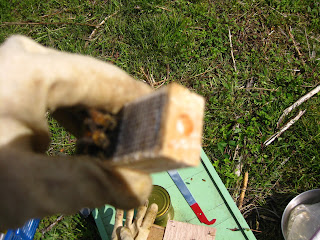 I took the queen cage and hung it into the hive body by tacking the tape to the top of a frame.  Then I turned the package upside down and dumped the bees in.  I had to slant the package back and forth a little to get all of them to leave it and go down into the hive. 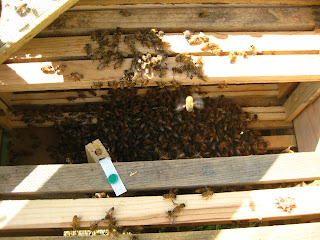 Then I returned the two frames to the box and closed it up.   I  put a shim around the top to contain a baggie feeder of sugar syrup to help the bees get started. 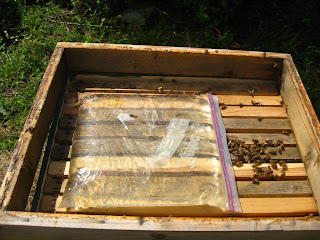 I hope this will help these bees since I can't come back until Sunday, May 1. 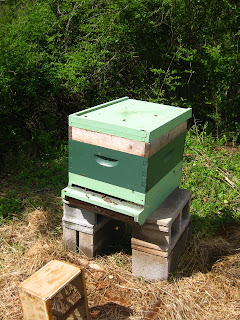 I left the hive with the almost empty package container in front of it to leave any errant bees a chance to get with their queen.  I put a brick on top to secure the hive top.  And then I drove back to Atlanta until next Sunday when I come back to check up on them.

They are behind and back of the community garden and I hope they don't draw too much attention.  See them in the back in the center of the picture.  I hope they are of great benefit to the gardeners! 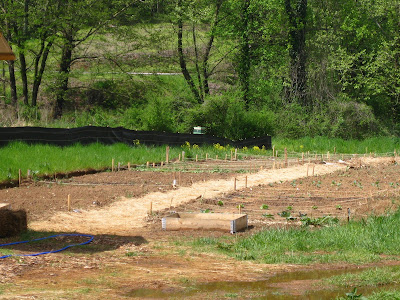