And What of the Queenless Hives?

In the first hive, Aristaeus2, I pulled out the cork from the candy end of the cage and wedged it in between two frames. There's lots of wiggle room in the eight frame boxes to do this. I'll check it on Wednesday and see if they have released the queen. I'm crossing my fingers and hoping that this queen will appeal to this growing-smaller hive. 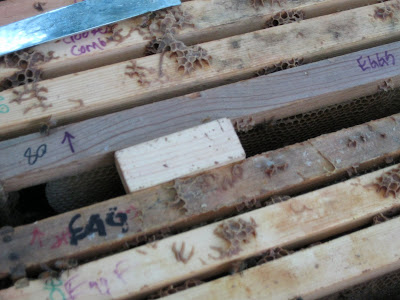 Shock and sadness, when I opened the L hive, it was practically a dead hive. There were bees in the box on all the frames, keeping company with slimey small hive beetle larvae (see photo below). The hive was a mess. 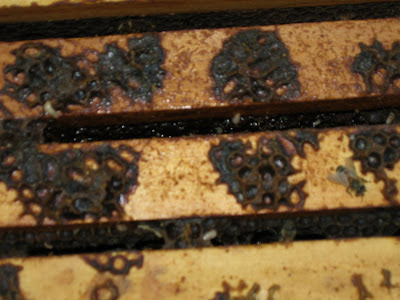 My plan was to requeen this hive but now I had a new problem. I took all parts of the hive and moved it about 25 feet away and set the boxes in my yard, as well as the SBB and the slatted rack.

I set up my 5 frame, two story medium nuc as a new hive and prepared to make a split. I placed the nuc in the old L Hive location but none of the boxes, the frames, etc. are from the old slimed hive. I opened my Easter swarm hive which has more bees and brood than it knows what to do with and took two frames of brood from that hive. I checked very, very carefully to make sure there was no queen on either frame. Then from an upper box, I took two full frames of honey from that hive and one frame that had some brood but many open cells.

The 5 frame nuc doesn't have enough space to wedge the queen cage between the frames and Don had told me not to hang the cage. So I put it on top of the frames and put the second story of the nuc box on top with one frame removed. The other frames are drawn comb. 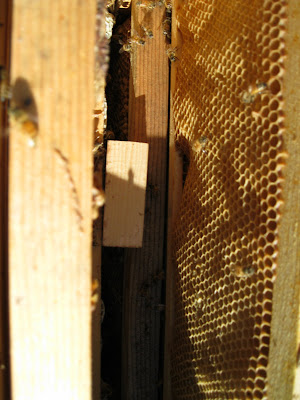 So here's the set up. When I finished and closed everything up, all of the old boxes (see the yellow box in the background) had been moved away and the nuc stood on its own ground. 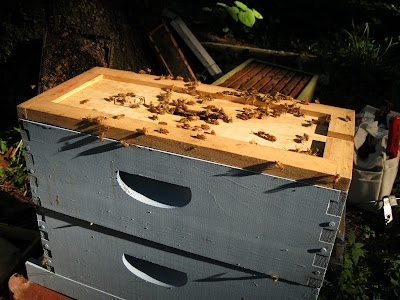 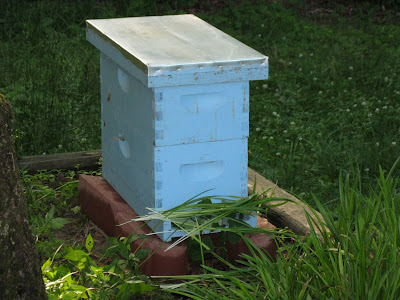 Meanwhile either two frames of honey are being robbed out in my carport or a swarm has moved into some hive boxes I have stacked there!  There have been swirling bees in large numbers there all day.