A Visit with Don (Fatbeeman) in Lula, GA


This afternoon I drove to Lula, Georgia with Julia and Noah to get the two queens I had ordered for my queenless hives. Don K is a character and fun to spend time with - I learned so much in the 45 minutes we spent at his beeyard. He was constantly sharing what he knows and challenging us to think about the whys and wherefores.

He had the queen cages ready. He said he knew I'd post pictures so he had new queen cages for me! We got to go with him into the yard to get the queens out of his hives. Note he has on NO protective gear - neither did any of the three of us. I did have veils in the car, but we didn't stop to put them on.

Don has his own system of hive marking. The brick you see in the picture with the stick on it means that the hive we are opening has a laying queen in it, ready to be sold and go to a new home. 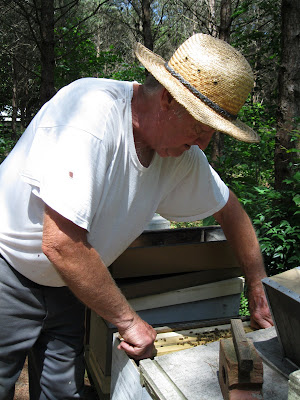 His beeyards (his land is covered with bee hives - all systematically organized in his own special way) sport multiple colors and many types of tops and bottoms. Many of his boxes are really boxes - solid on the bottom and four sides - with a drilled entrance hole. 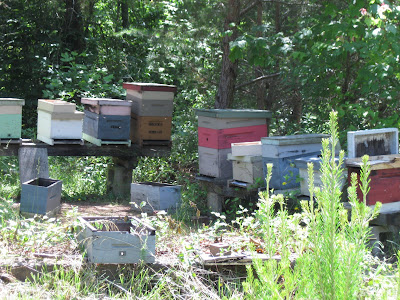 Here he explains his brick marking system to us. 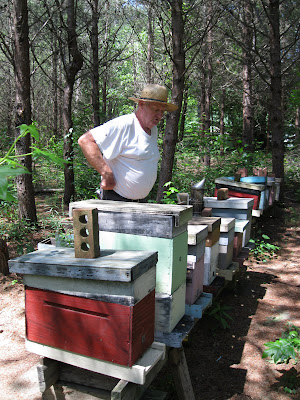 He shows us the brood and eggs this queen is laying.  He makes sure each queen that he sells is proven as a layer. 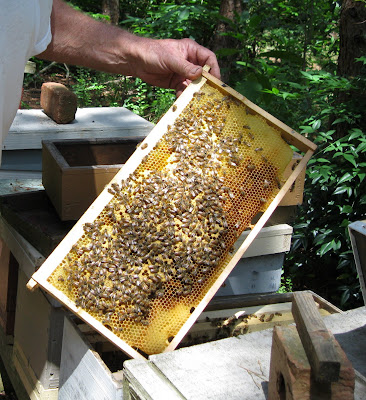 He had Noah, who is trying to be more comfortable with the bees, lay his hand right on top of them to feel how they are under his hand!  He was totally surprised but did well. 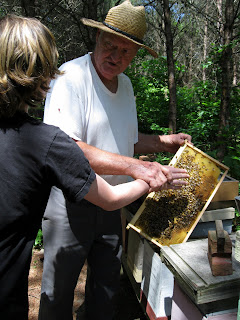 Don found the queen and put her in his closed hand; he held his hand over the open hole in the queen cage; she moved right in.  Then quick as a wink, he picked up about five workers from the frame and put them in with her.  He marked the hive as now queenless and we moved on. 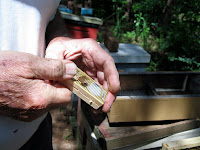 To rectify the queenless situation, he immediately moves to a hive that has queen cells (he can read the bricks on top of the hives to know which ones fit the bill).  He finds a viable queen cell. 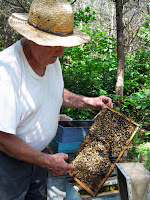 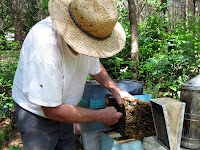 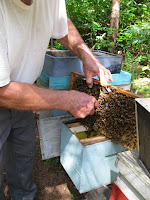 Using a knife, he cuts a circle of comb containing the queen cell.  The cut cell lies next to the smoker in the next picture 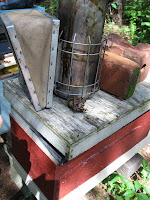 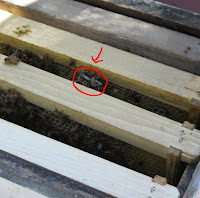 He then wedges the ripe queen cell between the frames of one of the queenless hives and that hive is in business again!

There's no way to cover everything we learned in such a short time in this post.  One of my favorite moments was when he pointed to this stack of nuc boxes.  "Now this is natural beekeeping," he said.  As he pointed out the nucs are about the size of a tree trunk and he can stack them and the bees will make honey forever.  "After all, it's just like a tree...." he said. 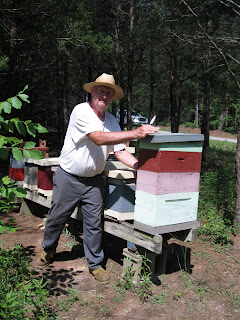 Don is a good beekeeper and a good teacher but does not appear to take a positive approach to his customers.

I have bought bees from him every year since I found out about him, so in 2011 I just let what he did go and chalked it up to his being basically a rather angry man.  In the most recent incident, he directly blamed me for the failure of a queen and hive after three weeks when the queen was obviously not mated well - the bees wouldn't release her and when we directly released her, she only laid drones.  He was very difficult to deal with, criticized me personally and my beekeeping,  and did not say, "no problem; I'll be glad to replace the queen"  Rather he said I would have to bring him the failed queen in order to get another and was quite angry and critical.

I will not ever buy bees from him again and, since I am in charge of the list we give out to new beekeepers, I am planning to remove his name from the list of suppliers that Metro Atlanta Beekeepers recommends to our members and participants in our short course.