Checking on the Top Bar Hive

Yesterday I went through all my hives to see how things were going. I drove to Valerie and Jeff's house to check on the top bar which I haven't looked at in 10 days. 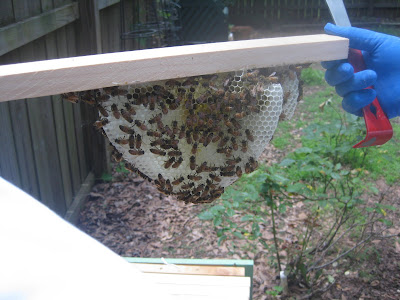 The queen is wasting no time in laying eggs. You can easily see eggs in almost all of the cells on the left of this picture. Isn't the new wax lovely? I love letting bees build their own foundation - it's always beautiful. 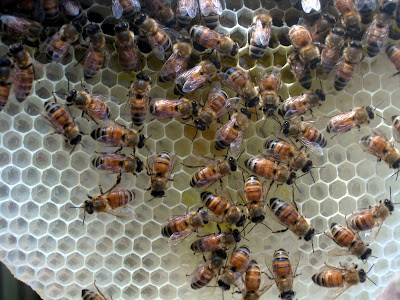 Where I had tied in old comb to welcome them to the hive, they are doing interesting things. Below you'll see an old comb I tied in. It had large cells so they are using it (the old comb) for nectar storage and have attached brood comb to either side. They definitely don't like the string in their hive and have made each piece I looked at fuzzy by picking at it with their mandibles. 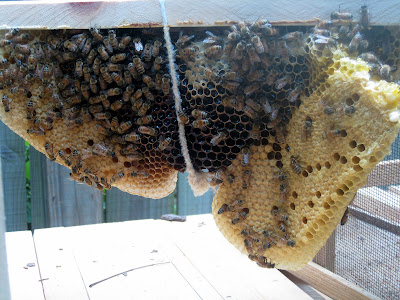 Early in the hive there were a few examples of cross comb. I hadn't interrupted this the last time I went in, so this time I worked on it to give them the idea that they are to build their comb straight. I exposed brood in this process and hated doing that but these bees need to build comb in parallel with the top bars.

If you'll look closely at this picture, you can see the each bee in the line extending her proboscis to collect the fluid leaking from the broken cells. 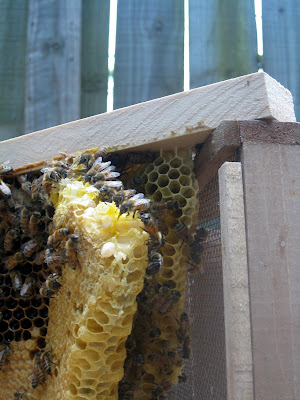 I'm still using the two empty packages to prop up top bars to look at them.  Setting the crooked comb top bar on them, I tied the now-broken comb onto the bar, pulling it more in line. 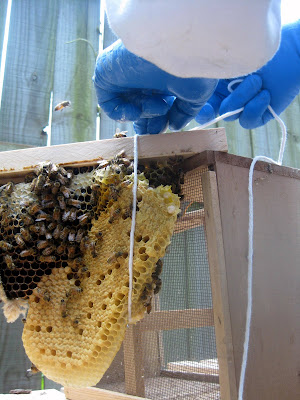 This is an interesting picture to look at because Don's bees are small-cell bees.  You can see the contrast between the cell size on the old comb and the cell size of the brood comb that the bees have built next to it.
Here are some of the other combs - notice the string and how they have managed it.  And notice how they have built around the tied-in-comb.  If you click on these pictures, you can view them larger.: 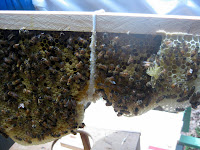 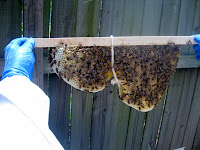 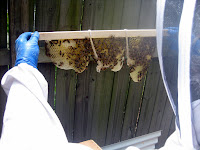 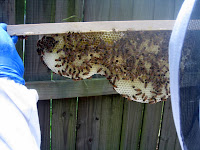 My daughter Valerie took all of these pictures.  I was so proud of her.  She threw on a veil and a pair of gloves but even though I brought a bee suit for her, she didn't wear it and wasn't worried.  I wish I had taken a picture of her - I will the next time.
I think this hive is going really well now.  It certainly has been a learning curve.  I am going to name the hive Topsy for Topsy Turvy - which is certainly the way it has gotten started in a topsy turvy way!