Still Queenless After All These Days

I installed two new queens, one into Aristaeus2 and one into the L hive, before I went to Young Harris.  The queens were installed on Saturday afternoon.  I had to leave on Wednesday from work so the last possibility to look into the hives was before 8 AM on Wednesday.  At that time at my house, the bees are not flying and it isn't really warm yet.

On Wednesday before I left for the office (from which I was driving to Young Harris), I opened the top on Aristaeus2 and looked into the hive enough to see that the sugar had been all eaten out, so I didn't pull up the cage and left thinking all was well.  I didn't have time to check the L Hive.

I got home on Sunday and opened both hives.  Aristaeus2 had indeed eaten out all the sugar, all the attendants were gone, including the two dead ones who were in the cage when I got the queen, and the now dead queen was left in the queen cage.  Of course, there was no brood nor eggs in the hive. 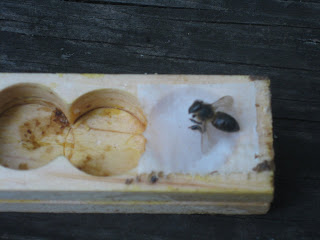 The L Hive is doing very badly.  There were dead bees on top of the ventilated hive cover, bodies bitten in half: 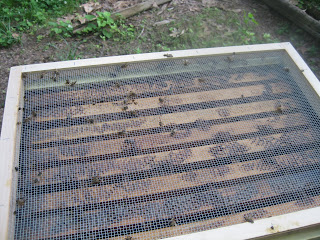 The hive wasn't robbed.  There was nectar in the hive and no torn wax cappings.  I wondered if this were the work of bald-faced hornets because I do see them around my hives.  I haven't seen any this year but last year they were always lurking in the bee yard.  They are carnivores and cutting the bees in half seems fitting for how they might carry bee bodies to their young.
The top box had slime on it from hive beetle so I took the box off and plan to render that wax.  I pulled out the queen cage.  She had not been released and the queen and her attendants were all dead.  The sugar had not been eaten at all.  I expect these bees have given up - they are from the abandoned hives that we rescued earlier this spring.
I am very distressed.  I feel like the L hive queen death was beekeeper error because I didn't check the cage at all before I left.  I don't know why the bees killed the queen in Aristaeus2.  The man I got the queens from guarantees his queens, but both queens were in cages with at least two dead workers in the cage when I picked them up.  I don't know how long they had been caged before I received them.  I don't feel good about these queens and don't want to get more from him.
I called Don (www.fatbeeman.com) in Lula from whom I got the great packages for Rabun County and the top bar hive at Valerie's house.  I am driving up to Lula to get two queens from him on Saturday afternoon.
I plan to introduce one to the Aristaeus2 hive.  In the meantime, I put a frame of brood and eggs in that hive from the swarm hive.  A hive doesn't lose hope (and develop laying workers) if they think there's a chance of a queen.  I'll check to see if they have made a queen cell after work tomorrow.  I also put a frame of eggs into the L Hive.
The L hive I'm going to move into a nuc.  I am going to take the queen from Don and put her in a nuc with medium frames.  I'm going to shake the bees left in the L Hive into the nuc and see if they can make do with a new start.  Bees are supposed to expand in the spring.  This hive has contracted and now it is going to be a nuc.....
Isn't beekeeping amazing - new challenges at every turn!
Email ThisBlogThis!Share to TwitterShare to FacebookShare to Pinterest
at 11:59 PM
Labels: medium nuc, queen cage, queenless, requeening