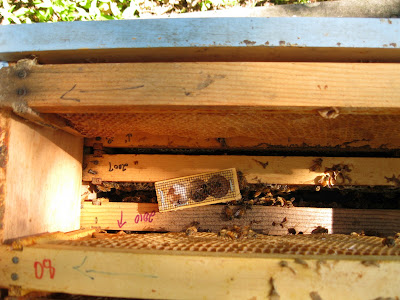 Just to be on the safe side, I removed the queen cage and closed up the hive.  I took the cork out of the corked end of the queen cage while I held my finger over the open sugar end.  Then I slid the entire cage into the hive at the entry.

Maybe the bees were still drawn to traces of queen pheromone still in the cage - who knows?

Given the fate of the L hive, I didn't like seeing the small hive beetle in the queen cage and returned to the hive and installed AJs beetle traps for a safeguard or at least a start to IPM management of this SHB problem. 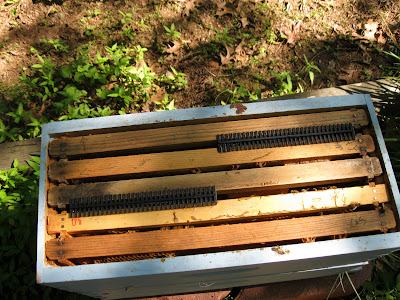 The way this bee season has gone, I only expect to get some honey from the Easter hive.  The other six hives will hopefully build up for the winter.

Valerie and Jeff's top bar, Topsy, backs up to a kudzu mess and they may get some of that purple kudzu honey - you never can tell with bees, as Winnie the Pooh said so wisely.  I may get some sourwood type honey from the Rabun county hive, but we'll see.  I'm going up this weekend and will optimistically take an extra box for those girls.