Today five days have passed since I installed the two queens from Don in Lula, GA.  I checked on one hive tonight to see if the queen had been released.

I opened Aristaeus2 and the hive was quiet.   I didn't plan to spend long in the hive so I didn't light my smoker or wear my beesuit.  I keep getting stung on my hands when I don't wear gloves, so I did wear nitrile gloves.

I picked up the queen cage and found that the bees had not released the queen.  I went inside and called Don.  He told me to make sure the bees were feeding the queen and not being aggressive.  If that were the case then he told me to release her into the hive.

I went back out to the hive and gently picked up the queen cage.  Bees were on the screen feeding the queen.  So I removed the cage and closed the hive up, after replacing the frame I removed to install her. 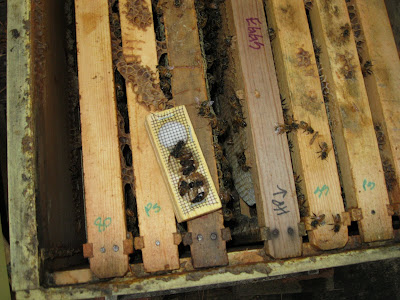 Don said that after the hive was put back together, I should carefully either remove the cork on the non-sugar end or push it into the cage, gently.  I tried to pry it out but instead ended up pushing it into the cage.

Following Don's instruction, I placed the now opened queen cage in the entry of the hive and Her Majesty walked right into the hive!  All of the workers in the cage with her were dead, but she climbed over their bodies and entered her new hive. 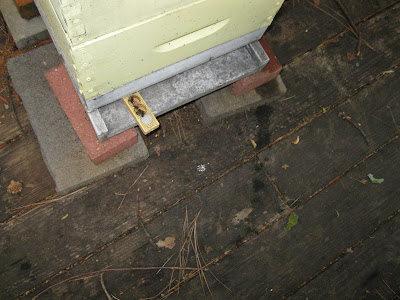 Tomorrow morning I'll take the queen cage out of the nuc.  I opened the top tonight and could see that they had eaten a pathway through to the queen, but there were still bees in the queen cage.  If one of those is the queen, I'll release her in the morning.  It was too dark and starting to rain, so I decided to wait until tomorrow so I could do this without pressure.