My friend Gina and I were making a movie for the short course about harvesting honey so I was late to the inspection which was in full swing when I arrived. Julia's first hive was reported to be doing fine. The second hive is one from a Jennifer Berry nuc that lost their queen right at the beginning. We gave them a frame of brood and eggs and they have made their own queen.

Julia's newly queened hive is boiling over with bees and small hive beetles (more bees than beetles, thankfully, but there were tons of beetles in a clump when she opened the hive cover). Julia does a great job of explaining the frames to the watching beekeepers from Metro Atlanta Beekeepers club. 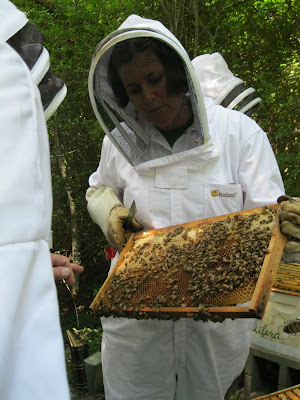 There are a lot of bees in this hive - the queen has been hard at work. Julia is looking to find her, if she can. 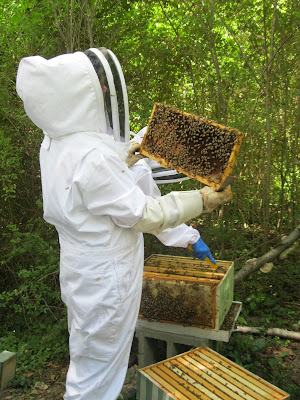 She was spotted on this frame. Can you find her? 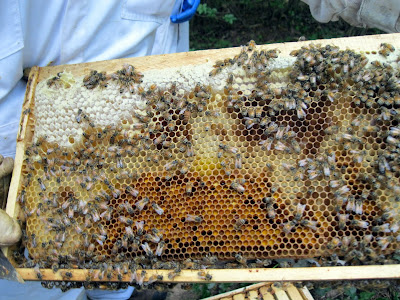 In case you couldn't find her, I've marked her in a red circle. Our queens in two of these hives are not "marked" since the bees made her themselves.  In the full frame picture, she's at about 11:00.  In this one she had moved more to the top of the frame. 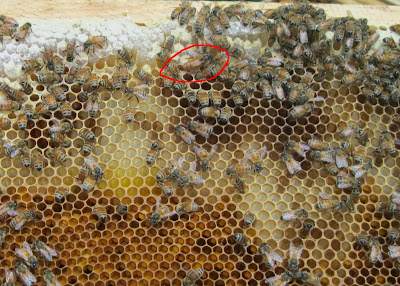 You can see the comb stuck to the side of the box in the picture below.  There was one whole frame in which the bees had secured the comb to the box itself.  We pulled some honey filled comb and are brushing the bees off of it in this picture.  Julia threw it into a bucket and took it home to harvest.  Then the rest of the comb we rubber banded into a frame and put it back in the hive - there was brood in it and we wanted to help the bees salvage the mess.  (Thanks to Jay P for this photo). 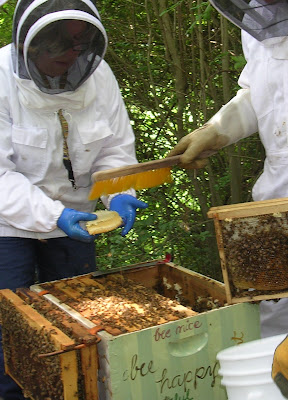 Then we opened my Blue Heron hive.  The girls have only built comb in about 1/3 of each frame in half of the top box.  We have no nectar flow in Atlanta, and I think they got a late start since they didn't have a queen for about a month.  However, given the smaller numbers of bees and the lack of building in the top box, I was worried that this hive was again queenless.

The goal of the inspection became to determine if there were a queen.  So I opened the bottom box and began checking the frames.

After finding two pretty much empty frames of comb, I found frames with beautiful brood patterns.  To my surprise I lifted up the frame below.  When this hive was queenless, I brought a frame of brood and eggs from my home hives.  This was the frame from which they made a queen.  All of my boxes at home are medium boxes so this was a medium frame.

I never removed it from the hive and they made use of the empty space below the frame. 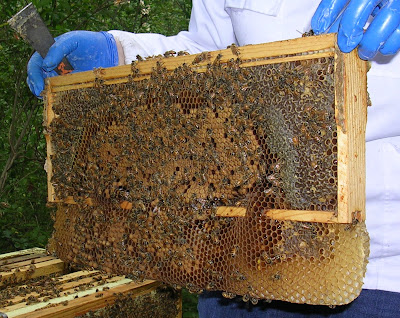 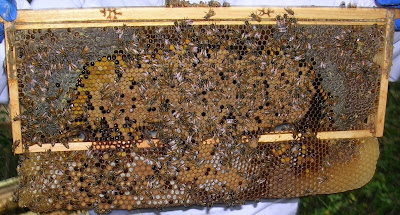 In spite of the odd configuration, you can see examples of honey storage around the upper corners, pollen storage just next to the brood, some drone brood in the lower left of the photo, larvae about to be capped, and capped worker brood in the picture above.  AND there's a queen cup on the bottom of the medium frame to the right of center as we look at the frame. A laboratory for learning about the bees in this one frame!

Thanks to Jay P for these two photos.

Email ThisBlogThis!Share to TwitterShare to FacebookShare to Pinterest
at 7:49 AM