In the Appalachian mountains, people would say that they learned to use every part of the hog except the squeal. I would like to make the most use of my bees - I love their honey and the wax they produce is amazing. Watching them produce the wax from the glands on their thorax and watching them connect with each other with the wax as they work to build comb makes me really respect what goes into the product.

We are all being taught that old wax is a source of disease and is not good for the bees to reuse year after year. I believe the current thought is that all brood comb should be changed out every three years. In addition, when you lose a hive and the small hive beetles take over (two hives for me this year), the slime on the comb makes it unusable and unattractive to bees.

Consequently I have a lot of old comb that needs to be addressed. I could throw it out but I want to respect the work that the bees put into it. In addition, if I get wax, there's lots I like to do with it in making lotion and lip balm. So I want to try to recover usable wax from these old combs.

I don't have the huge turkey fryer that Cindy Bee uses, nor do I have a propane tank, but I do have this stew pot that everyone hates - it's not heavy enough to do the kind of job I want it to do in my kitchen, making gumbo or stewing a chicken, so it's now been relegated to the rendering pot. I have a single burner, designed for apartment dwellers, so I plugged it in in my carport, filled the stew pot with water and began heating. 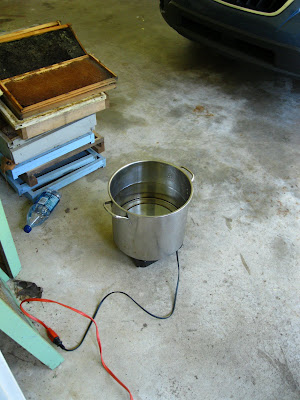 Lesson for next time: Put really hot water in the pot to speed up the heating time. 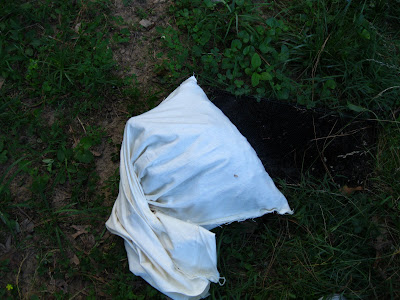 I filled the pillow case with old brood comb from the dead hive Julia and I rescued earlier in the season. The comb was wired and as I pulled out the wires, I could see the layers of cocoon casings that now lined the honey comb cells. You can see it too, if you click on the picture below to enlarge it. 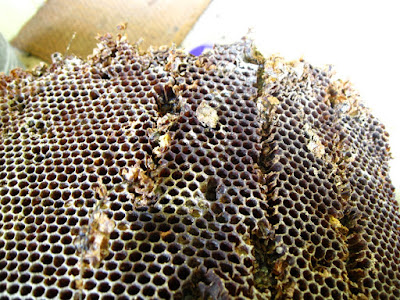 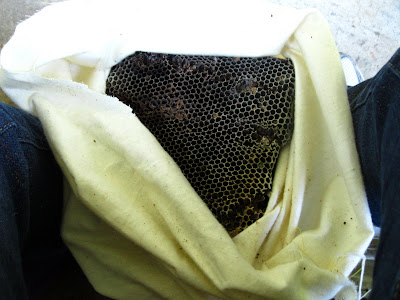 I put the filled pillow case into the hot/heating water. 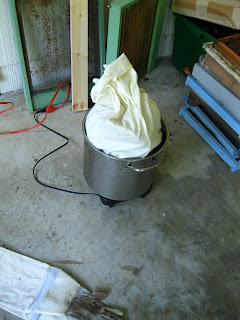 As the comb melted down, I twisted the pillow case to squeeze out the liquid wax, etc. as it melted.  Combs that have been slimed by the small hive beetle smell a little like Orange Crush and as this melted, that is the smell that emanated from the mixture.  The water turned dark, dark brown. 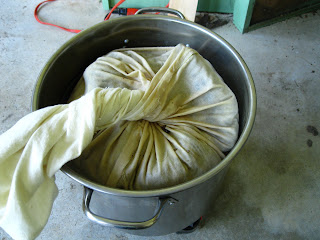 As the comb melted the slum gum inside the pillow case got smaller and smaller. 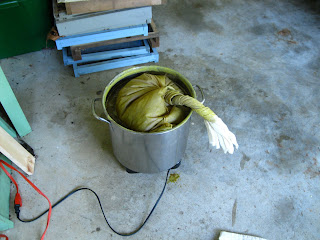 I didn't have a colander that would fit the stew pot, so I bought this grill skillet with large holes, just perfect for draining the liquid out of the pillow case. 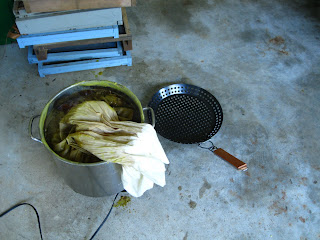 However, the pillow case filled with slum gum did drip a little out of the pot when I put it in the grill skillet.  Later I scraped the hardened wax up off of the concrete carport floor and was grateful that it wasn't my kitchen floor! 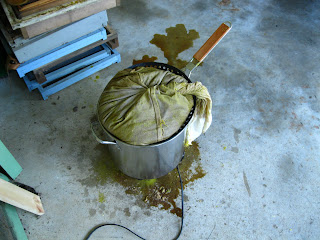 I left it to drain all night.  The next morning the non-stick skillet was pretty clean and wax was floating on the surface of the nasty, nasty water. 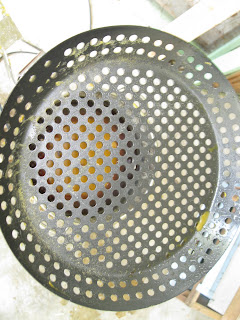 Isn't the water gross?  And it still smelled like Orange Crush. 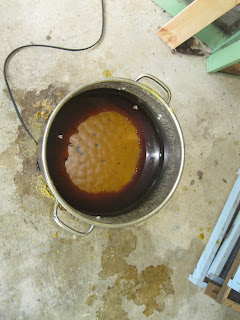 Here's the end product - a cylinder of wax about 1/2 inch thick.  This still has a way to go before being in a state in which I can use it for lip balm, etc.  I plan to break up this cylinder and melt it in the solar wax melter where it will get filtered yet again and bleached by the sun. 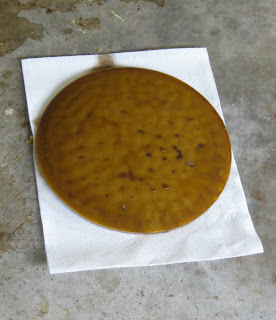