Slimed! SHB kills Another of My Beehives 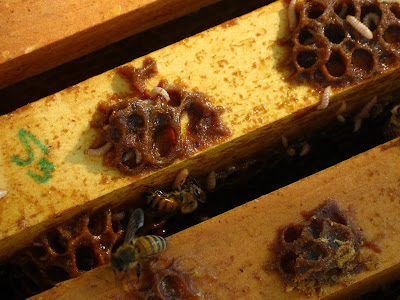 The damage from SHB is so slimy and so gross.  The queenless hive, left for a week while I went to a conference is in a state of complete demise.  SHB slime and larvae were everywhere.

We are in a dearth and bees were also everywhere - not living in the hive - but robbing out any and all nectar that they could find.  There were so many and they looked so organized that at first I thought a swarm might have moved in while I was gone, but watching closely it was clear that these bees were invaders.

In most robbing instances the bees are at battle - resident bees against the marauders.  In this hive, there were so few bees and they were so quickly defeated that the bees entering the hive to rob it, entered without the caution or hesitancy that robbers usually employ.

Below you can see the sheen of the slime. 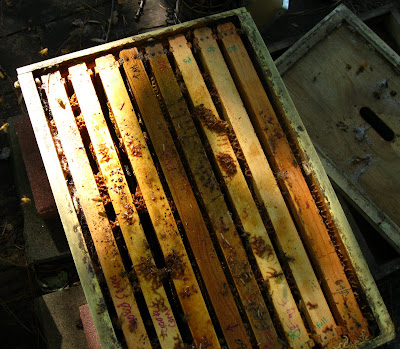 Most gross are the slimy larvae of the small hive beetle. 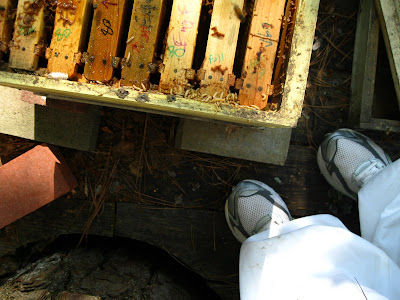 Here's a huge pile of them.  I left the hive wide open to the sunlight to get rid of the larvae.  I said in an earlier post that I would be ordering nematodes but I didn't do it.  That's first on my list today. 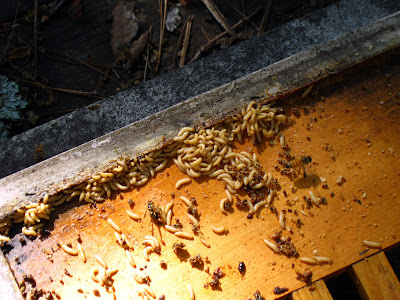 On the good news side, I went to a talk by Cindy Bee at Young Harris on rendering wax.  She used the combs that had been slimed by SHB.  I ordered a burner (she uses a propane burner but I got an electric one) and will have an opportunity to melt down this gross wax using her methods.  Then I'll probably take the product and render it a second time in the solar wax melter.