So I'm a little out of focus and these pictures are a lot out of focus - I had the camera on the wrong setting and no tripod.....

First both of my hour interviews are playable online at Radio Sandy Springs - these were hour long talks about beekeeping in general for the Master Gardener Radio Hour. Here's the first one and here's the second one.

Today I was through early at work and came home to check on the bees. The first hive I opened was the Don nuc hive. I last looked in on June 15. At that time the queen was laying well and I was happy. I only lifted up one frame to see if there were eggs and since there were, I stopped the inspection then and there.

Maybe in lifting that one frame, I either killed or injured the queen who is now no longer there. There were no hive beetles in the hive and no eggs - just a little capped brood and two queen cells. Here's one and the one on the other side of the frame looked fabulous and ready to emerge. It was about 1/4 inch longer than this one.

I imagine emergence should happen in the next day or so, since this is July 7. It's actually too late for the queen to have been killed during my inspection. But how else could she have died?

To help this hive, I moved two frames of brood and eggs and all the bees that were on the frames from Mellona into this hive. That will increase the nurse bees available and up the numbers. The hive has one completely capped frame of honey and the dripping frames from the three frames I harvested for the bee movie. 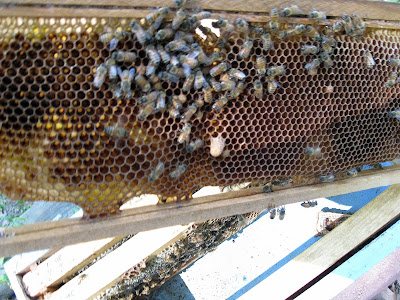 This was also the first time I opened Mellona and the Easter hive since trading spaces. Mellona looked good and I saw the queen (below, out of focus). She was a lovely majestic bee, moving gracefully around the frame. I put her frame very, very gently back into the hive and took a couple of other frames to the Don nuc hive. It was important that I find her and not move her by accident. 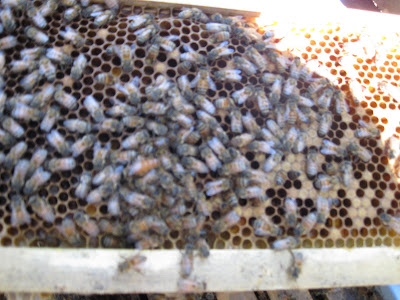 The Easter hive (the one from which the too-moisturized honey came) has found some nectar source.  They had built out comb in four or five of the frames in their top box and were storing something.  I usually have some honey stored in July - maybe from catalpa or sumac, but something is blooming. 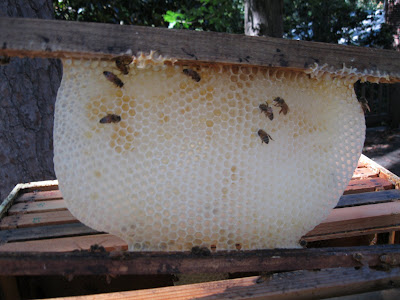 This has been the oddest year.  I usually am madly taking pictures of bees on cucumber, echinacea, butterfly weed, butterfly bush, abelia, anise hyssop, etc.  I have not seen a honeybee on any of those plants.  The only nectar gathering bees I've seen are on the clover at the nearby school and that clover is burning dry now that we haven't had rain for a couple of weeks.