An interesting discussion was held on Beemaster lately with the thread titled: "Why Don't My Bees Like the Right Side of the Hive?" Michael Bush and others replied that bees are very efficient in their use of heat. They build the brood nest with that in mind so that the brood can be heated by the sun's heat, eliminating some of the work of the bees to keep the brood warm.

My Rabun hive faces east, but apparently not east enough for the bees. Actually in the summer sun, the hive faces slightly southeast. Consequently the bees in the installed package started building comb and have stayed mostly on the eastern most side of the box. You can see in the picture below how the bees are congregated on one side of the box. 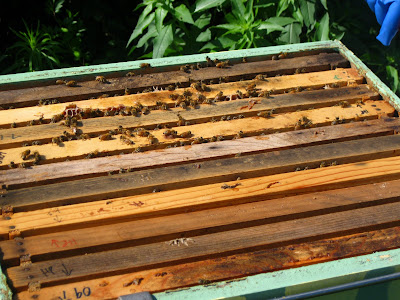 I was there a week ago and they had barely begun building comb in the second box. I had thought the comb was for sourwood honey and was disappointed, in a way, to find eggs in what I thought would be comb for honey storage. In the last week, with the sourwood flow in full swing, the bees have been building out this box like mad.

Below you see them festooning on on of the last two empty frames in that hive. The rest have honey stored and are being filled up with nectar. 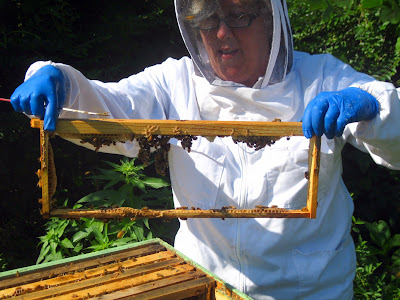 Here's some newly built wax since my last visit. 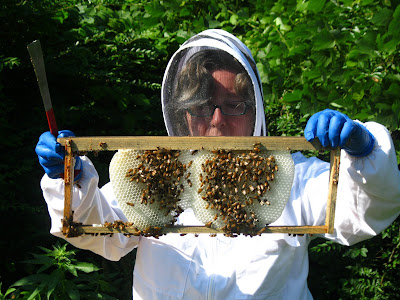 The comb below was slightly cross-combed at the end. I gently loosened it from the next door frame - you can see the loosened comb on the left side of the photo - and rubber banded it into the frame in the right place. 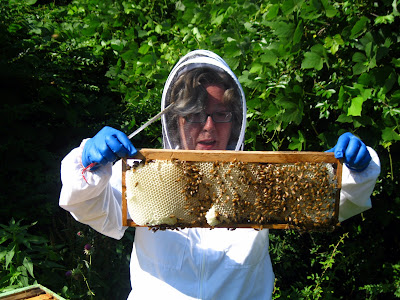 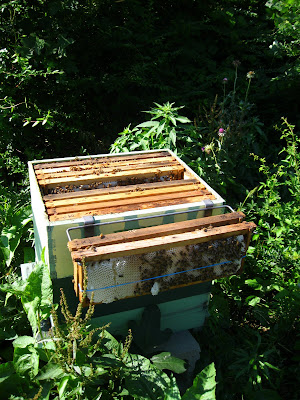 I am so happy about how things are going with the Rabun Community Garden hive.  The bees are making honey.  The garden is lush, I'm sure in part due to the bees working on the pollination (great cucumbers, squash!). 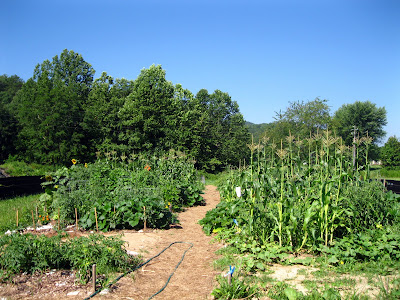 One of the community gardeners was there and took a picture of me with my helpers for the day: my daughter Valerie, her husband Jeff, and his father Harrison. 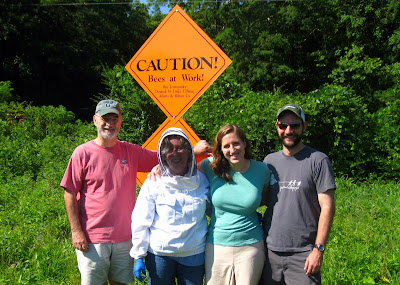 Thanks to Valerie for these pictures of the hive, now doing great at the Rabun County Community Garden.