Mickey Anderson has been keeping bees for years and years. He once worked as a queen grafter for Rossman Apiaries. He talked last week to the Metro Atlanta Beekeepers meeting about grafting queens and how to do it. 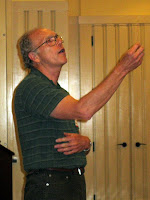 Here he is holding up the small copper wire instrument he actually uses to graft queens.  The instrument is long with a 90 degree bend at the very end.  That end is for scooping up the larva from the bottom of the cell.  The larva that is grafted needs to be less than 36 hours old for best results.

I tried to get a close up of the instrument, but my camera chose to focus on the people on the other side of the room.

Because this was too tiny to use for demonstration, all of us died laughing when Mickey pulled out a hoe and a c-shaped piece of drain piping to show us in large how the larva is grafted!

Here he is, hoe and piping in hand, to show us the way you lift the larva from the bottom of the cell. 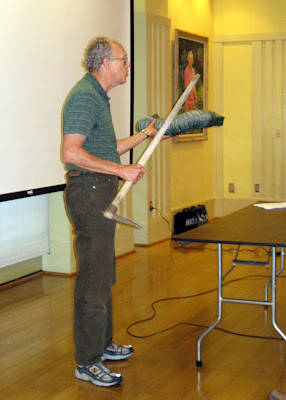 In the picture below he is showing how the tip of the hoe has to go under the larva to lift it.  It can't be flipped over because it will smother since the spiracles will then be down in royal jelly. 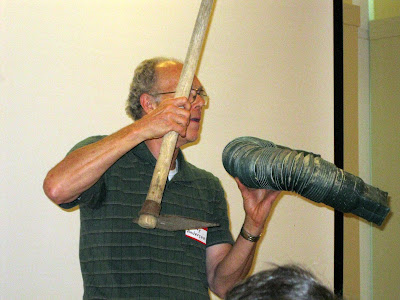 Here he slides the "instrument" under the "c-shaped larva."  to lift it up. 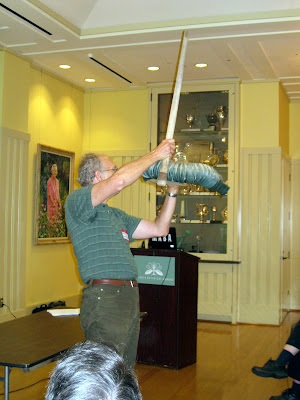 I thought this was one of the most entertaining demonstrations I have ever witnessed! 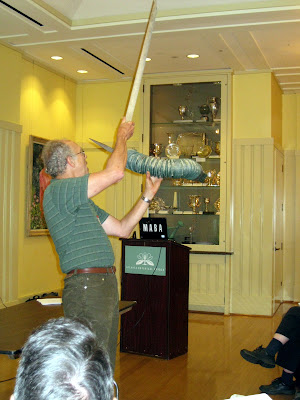 He went on to describe a method so complicated of moving hive boxes and putting the queen cells into frames and moving brood.  He called it the Doolittle method, but said, tongue in cheek, that it was really the Do-A-Lot Method of queen grafting.  Michael Bush talks about the Doolittle method which was invented really by Schirach.  It involves a bunch of moving frames from one hive box to another, restacking, turning - like the hive boxes are dancing in the process of raising queens.


I hope some others of you have a chance to hear Mickey give this talk.  What an enjoyable bee meeting!

Email ThisBlogThis!Share to TwitterShare to FacebookShare to Pinterest
at 12:08 AM
Labels: queen cell, queen rearing