And on the deck, another inspection

This not-exactly-queenless hive is not doing well, but I don't understand what is going on. They have a queen who isn't laying. They've had a small hive beetle problem but that appears much more under control. They aren't consuming the sugar syrup I've had on there for two weeks.

The Sonny-Mel trap is accumulating dead beetles by the day. I saw no beetles under the cover and only two on the under side of the inner cover. There are lots of dead ones in the trap below. I also had an AJ's on this hive and it was full. I refreshed the lure in the Sonny-Mel trap and put more oil in the AJs. I also added a second AJ's beetle trap. 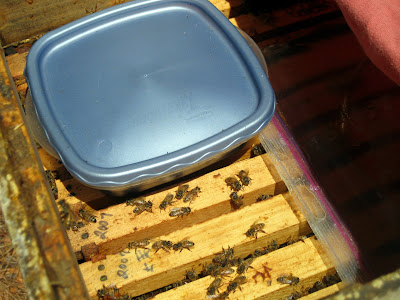 I didn't go deep into this box. I pulled up two frames of honey from the bottom box, so they do have some honey. Maybe that's why they aren't laying or consuming. 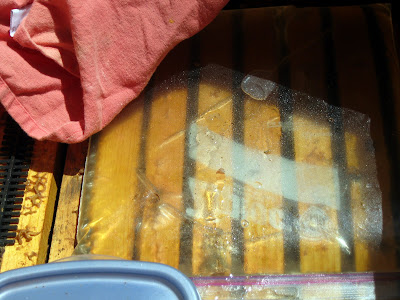 The nuc hive is going great guns. They had emptied the two Boardman's feeders. I replenished their supplies. 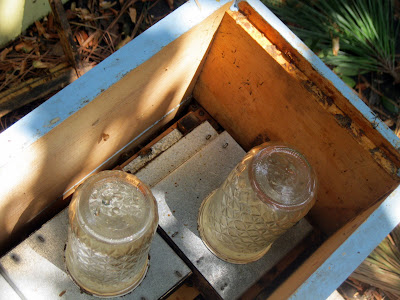 In the hive there is laying going on and you can see at least five eggs in this picture and two tiny c-shaped larvae. The eggs are at 2 and 3 o'clock. The queen is eager. 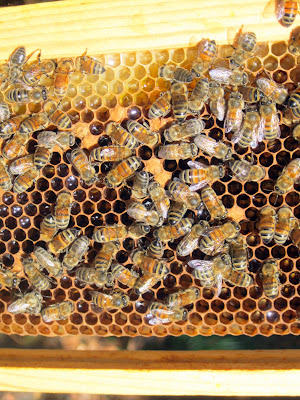 I keep thinking about Don K in Lula who points proudly to his nuc hive with five boxes on it and says, "How much closer to a tree can you get?" His nuc hive is very productive. I am going to add another box to this nuc hive and have a tree hive on my deck myself!