Sunday morning after inspecting the Rabun County hive, I drove back to Atlanta for an inspection at the Blue Heron at 2 PM. Noah, Julia's son, led the inspection and did a really great job. We had a small group of beekeepers for this inspection, which made it easy to move around the hives and to be a part of it.

Noah is about to open the first hive and is explaining about the smoker and our foundationless frames. 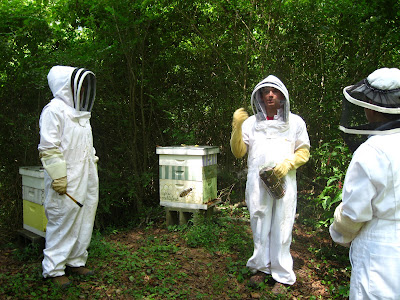 He takes the ventilated hive cover off of the first hive. 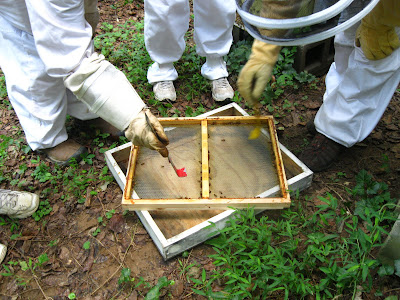 There were a few hive beetles on the inner cover and we smashed them with our hive tools. This hive had been chock full of hive beetles, but the numbers have significantly diminished since we put the nematodes all around the hives at Blue Heron. 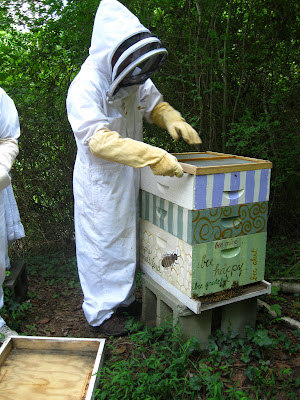 There's no nectar so the bees have no resources for building wax. But to be sure they wouldn't fill the empty space with wax when Julia and I took two frames out of this hive this past Monday for my nuc, we filled the space with newspaper. We would not have left the hive like this, but I didn't bring shallow frames with me when we took the frames. I only had mediums. 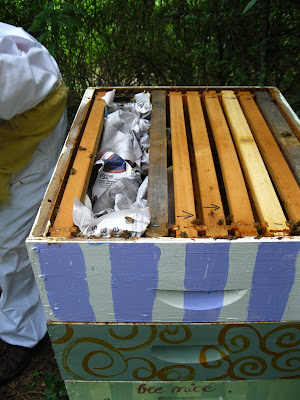 Noah is showing the participants the brood and eggs in this frame. 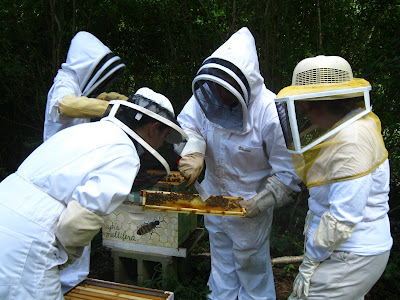 When we moved to my hive, I wanted to try using hive drapes as I had in Rabun County that morning. 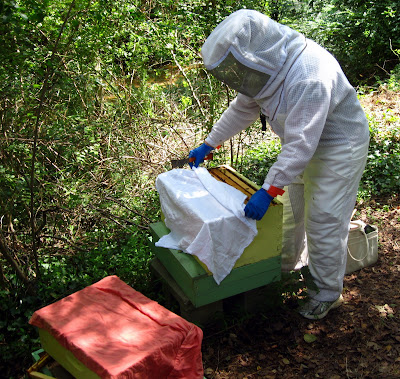 In this hive, even though it faces east, the bees are putting the brood, the honey, etc at the back of the hive.  This probably means that the sun hits the back of the hive first in the morning.  Bees like to let the natural forces heat the hive so they don't have to work so hard.  The queen in this hive is laying well despite the lack of nectar resources available. 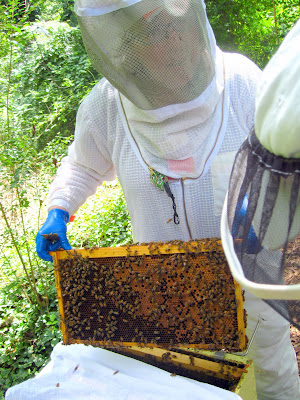 Finally we moved the the third hive at Blue Heron where Noah decided to try the hive drapes as he worked on it.  All of the Blue Heron hives are light and have very little stored honey.  We are worried about them and put sugar syrup or honey on my hive and the hive below.  The first hive we looked at has stored honey so we didn't put food on it. 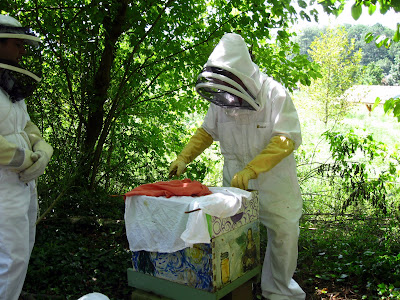 This is the first Blue Heron inspection when we didn't see the queen.  These hives all feel a little fragile to us because they are so light on stores and we didn't want to disturb them as much as we would have needed to to see the queen.  So we looked but we didn't find Her Majesty in any hive.

At the end of the inspection Noah and Julia shared with us some delicious creamed honey they had made after the three of us took Keith Fielder's workshop at Young Harris.