I drove up to Rabun County in the pouring rain yesterday, planning to visit the bees and inspect the hive. Last time I was there on August 8, they were angry and had a field day with me (no smoker, only a jacket).

Although it poured all day yesterday, today the sun broke out and I broke out my Golden Bee suit - no stings for me (it's almost impossible to get stung in the Golden Bee suit). Fully prepared with smoker, Golden Bee suit, and curiosity, I opened the hive at the community garden this morning.

The hive is full of bees. Box one is mostly brood. Box two is mostly honey. Box three is comb and little else. There were no hive beetles, the bees looked healthy (no DWV, no sign of varroa mites), and there are still a few drones in the hive. 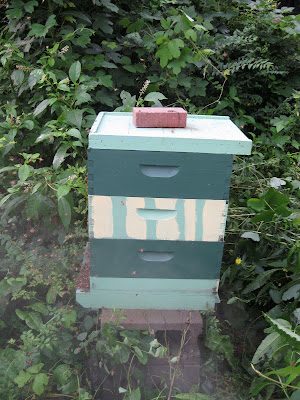 At EAS Billy Davis really advocated using hive drapes, so I brought flour sack towels that I buy from Walmart to cover the boxes. These towels are all cotton, light, and lint free. Using them I'm not likely to leave any reminder of the towel behind in the hive and the bees won't get caught in the material as they might in terry cloth. This accomplishes two things: it disturbs the bees less because the box is not suddenly exposed to the bright light of the sun and it keeps the hive from advertising its honey stores to any potential marauding bees from other hives. 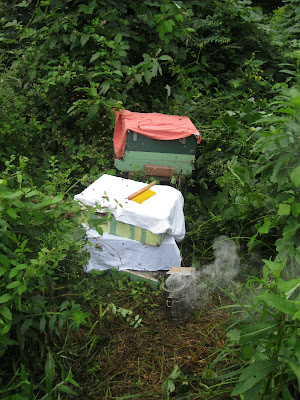 I am dying to see what their honey tastes like since I've only gotten honey from my backyard bees in Atlanta. These bees can get nectar from sourwood and from kudzu neither of which is available to my Atlanta bees. So I took two frames of honey from box two and replaced them with drawn wax from a box in Atlanta.

This hive had great stores of pollen as you can see in the picture below. 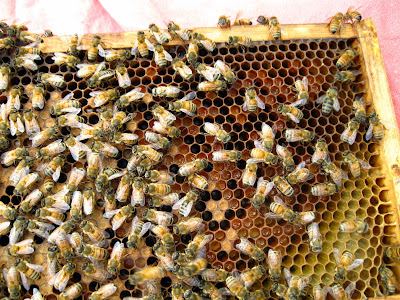 Also the queen has been hard at work as you can see in the brood below. I think the picture below is upside down, but the brood is still visible to your in the cells either way! The larvae look healthy as do the bees in this hive where I have never seen the queen. 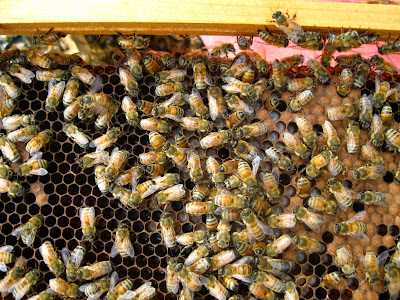 The two frames I took were frames of drawn wax from last year that I had put in the hive. I brought it home to crush and strain. This is the first time I have tried crushing wax that isn't brand new. It wasn't easy. Actually there were two problems. I couldn't find my pestles and remembered that someone had suggested on this blog that I use a potato masher. 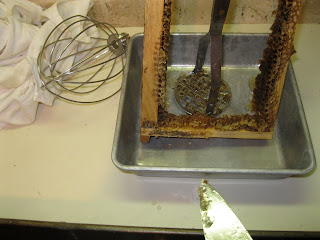 One of the frames I brought back had popsicle sticks as starter strips rather than wax.  The cut popsicle stick showed up in the crushed wax and at first I had no idea why wood was in the honey.  Then I realized what it was! 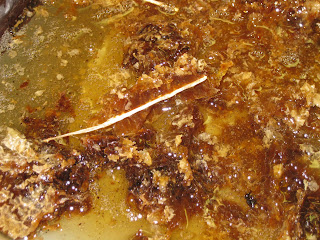 I let the crushed honey drain all afternoon and the wax at the end of the day looked like this: 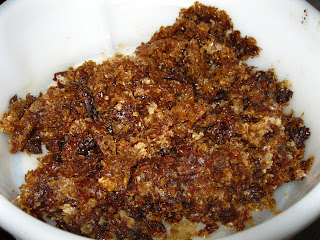 Because it was old wax, the crushed wax looks dark and stiff, unlike new wax that I usually see.

Then I tasted the honey - WOW - it tastes a little like grape which means that there is definitely some kudzu in the honey.  It's only a small bit - maybe six pounds if I'm lucky - but I am thrilled to get it.