There's good news and there's good news! The little nuc started on Monday from Julia's two frames of brood and my two of honey and one of empty cells (poverty stricken resources in the beeyard) has claimed their space. They should have had a frame of pollen, but I didn't have one to put in there.  They are working hard to move the pine needles that I put at their door to help them remember where they live. 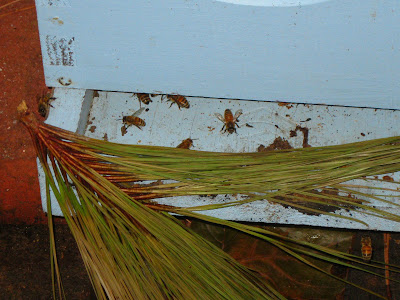 And when I opened the nuc, they had released the queen and cleaned out the two dead workers' bodies. The food I left them was all used up. I didn't go into the box. If the queen is getting started, more power to her and I'll leave her in peace for a bit. 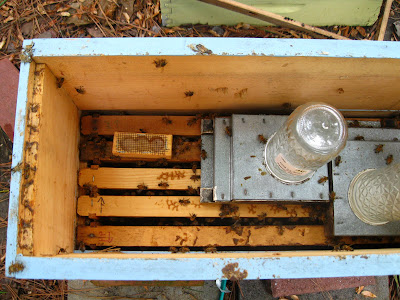 So I added new syrup to the Boardman's and this photo looks like I left the queen cage in there - oops, I think I did. Well, I'll get it on the next inspection. 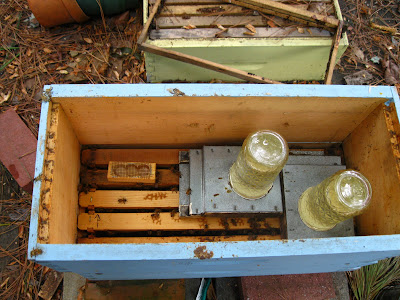 Generally the bees in the nuc looked happy, content and were going about their bee-business. 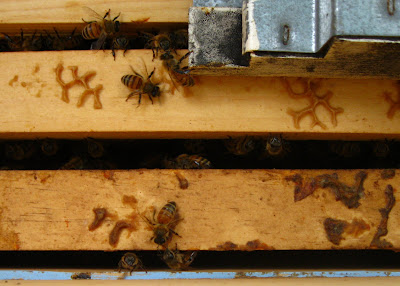 In the hive I thought was queenless, I had reduced the hive to three boxes on Monday. I put in a baggie feeder and two beetle traps. One was an AJs and the other was the Sonny-Mel beetle trap I made a couple of years ago.

The Sonny-Mel trap is made from a Rubbermaid/Tupperware type sandwich container, with 3/8" holes opened in the sides with a soldering iron. You put lure in an upturned bottle cap and put it in the sandwich box. Then you pour in mineral oil, put the top on the sandwich container, now beetle trap, and place it on the top bars. The beetles are attracted to the lure and die in the oil.

The disadvantages of the S-M trap is that you have to surround it with a shim or an empty hive box and that it's a little bit of a pain to make. The advantages of it are that it sits on the top bars so it is where the beetles are usually found in the hive; it doesn't change the ventilation of the hive like a tray under the SBB does; it's a cheap solution that works; it's easy to fill (unlike any other SHB trap; it's reusable, and it's not awkward to put it onto the hive (like most SHB traps).  And after all, it's quite gratifying to see the dead beetles; 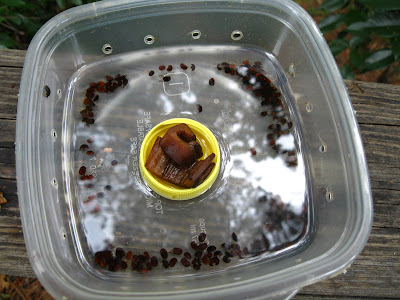 This is a three day beetle kill and there are the most beetles under the glare on the right side.  That stuff in the bottle cap is fermented banana peel with cider vinegar and sugar. I refreshed the lure, but didn't empty the dead beetles.

The only curious/bad news of the day is that the bees in the not-really-queenless hive did not touch the full baggie of sugar syrup I put in there on Monday.....There are lots of bees, a queen, and some honey that has been invaded by the hive beetle.  Seems like they would have dived into the sugar syrup.  I don't know what is wrong with this hive.