Queen from Don K in Lula 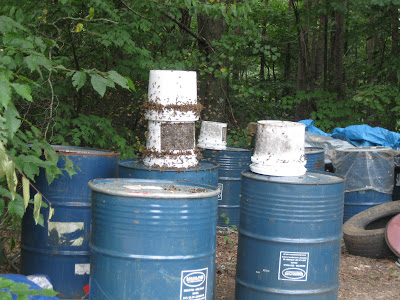 To add to my list of woes this year - no honey, absconded hive, bad bee luck, I opened my remaining hive at home to find that they were queenless.  So I called Don K in Lula and asked if he had queens - of course he did, so I arranged to drive up to pick one up.

Don feeds his bees all year long - a mixture of his own version of Honey Bee Healthy with wintergreen so strong it makes my eyes burn.  The bees are always gathered around his feeders which sit on barrels of sugar syrup. 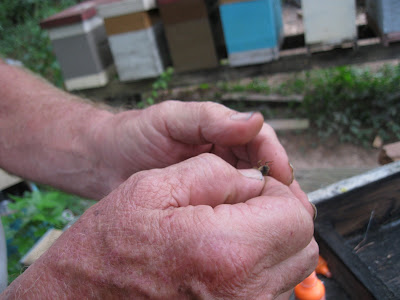 He caught the queen in his hands to mark her for me.  I didn't need him to mark her, but I wanted to see him do it. 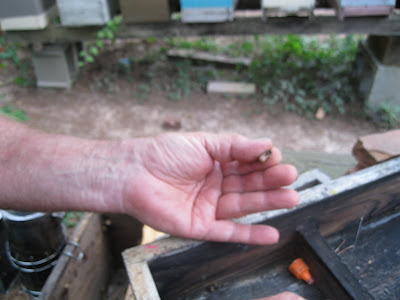 Here he holds her by the legs. 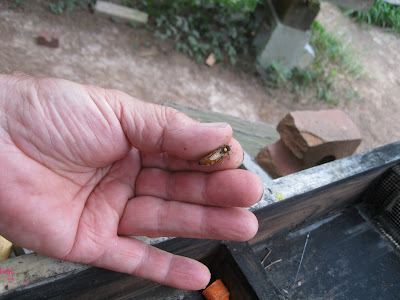 And here she is with a bright florescent orange dot on her back. 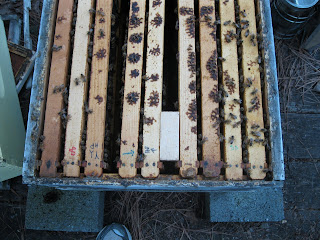 I brought her home and installed her in the queenless hive.  This hive has several empty boxes or almost empty so while I had the hive open, I culled out empty frames and rearranged honey filled frames.
Meanwhile as I put the hive back together, the air was filled with swirling bees.  Robbers - probably from the absconded hive which isn't far from here I'm sure.  What a mess!  I put on the robber screen - luckily it was around 7:30 PM and got the sprinkler and set it up to spray over the hive.  By nightfall, it was all over and the robbing had stopped.
I left the robber screen on the front of the hive because I will be away all week at the meeting of the Eastern Apicultural Society in Boone, NC and don't want to come back to a robbed out hive.

Email ThisBlogThis!Share to TwitterShare to FacebookShare to Pinterest
at 3:55 PM