When I can go to a bee meeting and not enter something in the honey contest, I will think I am a mentally healthier person!  I decided to enter a wax block because I had a little wax from the harvest of the too-thin honey that Gina and I did for the movie.  I also had some wax from last year.

Six pours later every block I poured cooled with a crack in the center.  I was so frustrated.  A crack in a cooled wax block means that there was uneven cooling.  I was cooling all six of these blocks in my upper over which is a convection over.  You can see the fan at the back in the picture below.  I have always cooled my blocks in the top oven, but this time it wasn't working.  I decided it must be because air is let in through the fan and makes the temperature uneven. 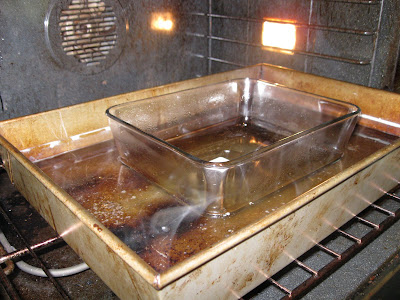 Below you can see the wax melted in my Presto converted pot. 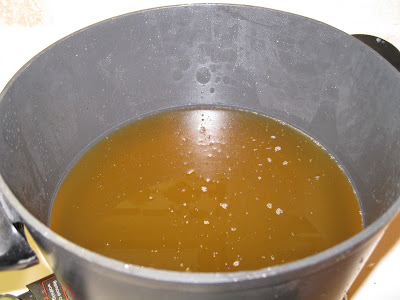 I"ve learned to heat the large measuring cup into which I filter the melted wax so that the wax doesn't cool on the bottom too fast.  So I set the cup in a pot to heat it before filtering the melted wax into it. 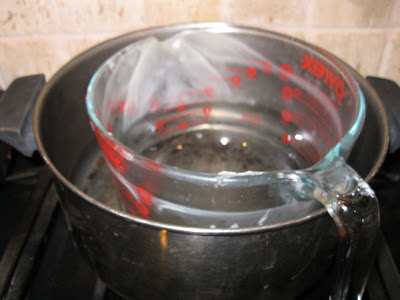 I was leaving for EAS on Monday afternoon.  So on Sunday night in utter frustration, I poured one last pour into a metal brownie pan and put it to cool in the bottom oven.  I pulled it out on Monday as I was packing the car.  It was not cracked!  Hooray!  But it wasn't perfect.  There were a few flecks in the wax because I had not used a brand new piece of silk to filter it. 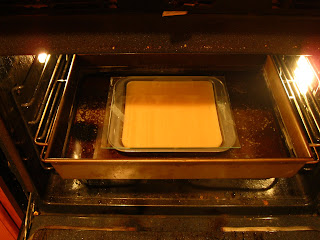 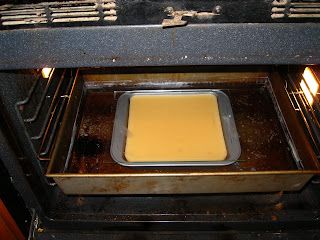 You can see that it cooled well in this lower oven.  Not only did it not crack, but also it pulled away from the sides nicely. 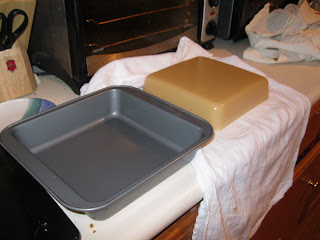 If it were not a last minute pour, I would have done it again.  There were flecks in the wax from not using a new piece of silk for a filter, it was darkened from now being poured 7 times (reheating every time), and it had been cooled during the day so the bottom side had some ripples on it.  Oh, well.  Without a honey harvest this year, I don't have good wax, so I may not pour another block this season.
I brought it to EAS and entered it into the show.  This show like the one at the state meeting in Georgia in 2008 only said a solid block of wax. In other words they did not require that it be simply a block that is square or rectangular.

It is very difficult to pour a square or rectangular block because every flaw shows.  If you use a patterned mold, then it is easier to conceal the flaws and the block is not likely to crack.  This show is full of blocks poured into patterned molds. So my block is not destined for a ribbon this time around.

Maybe instead of sticking to tradition, I should use a patterned mold as well for the next show.  Maybe I'll find a patterned mold before the Metro show in September. (Oops - guess mentally healthier is not where I am going!).

I did enter several other things - I entered my attempt at creamed honey so that I could get the judge's comments on what I need to do differently.  I entered photography in several categories and I entered my cross stitch in the crafts category.

Email ThisBlogThis!Share to TwitterShare to FacebookShare to Pinterest
at 7:06 AM
Labels: wax blo