No Bees at Home

I guess the end of this saga at my house is that there are no bees at home. The hive on the left is the huge one that absconded earlier in the summer. The middle hive with the robber screen on it is the one I moved to a clean box to try to thwart the fact that they appeared to be a dying hive.

The nuc box (blue) on the right is the nuc I started with the queen who had been caged for two weeks when I finally realized it and moved her to this nuc. She must have suffered from PTSD after such a long caging and didn't get going - her brood pattern was spotty at best and in the end, the nuc was robbed out and all the bees died. 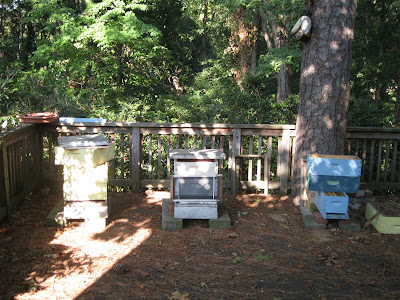 The wax moths will move in if I don't move the wax into the freezer - which is a project for tomorrow. You can see a wax moth cocoon on the right on frame 3. 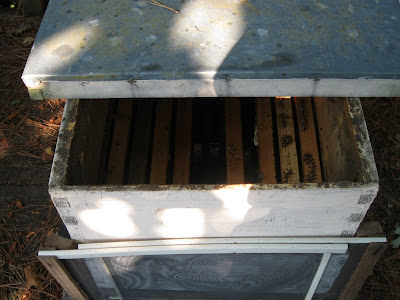 To add to the sadness, when Julia, Noah, and I went to Blue Heron today to check on and feed the bees, one of her two hives there had absconded. There wasn't a bee in the place.

So goes this summer. I hope next year will be better for both bees and me. At least I still have the Blue Heron hive, the hive at Valerie's and my hive in Rabun County.

I want to sell my house and move closer to my Atlanta children so that I can be a more active grandma. This will give me an opportunity to move the hives off of the deck and have it pressure washed and maybe stained to help sell the house next spring.

I've already ordered two nucs from Jennifer Berry for next year. I'll probably get a couple from Don in Lula as well, but he doesn't take orders until the beginning of the year. I'll put those bees either at Rabun, Blue Heron or wherever I live next!