I've been feeding Topsy a quart - two quarts a week for the last two weeks. On Tuesday I took two quarts of syrup over there and was pleased to find bees tumbling over each other at the entrance, loaded down with pollen. 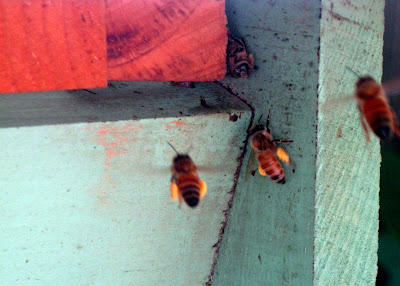 I had only taken one quart over on Thursday the week before and it was totally used up. I did see about 10 small hive beetles on the Boardman - which upset me, but I'll take a small hive beetle trap over there - the Sonny-Mel will sit fine on the screened bottom - the next time I go. 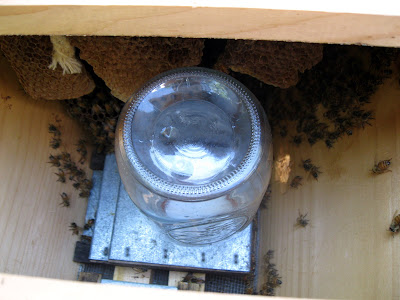 The hive is only occupying bars 1 - 10 but there are plenty of bees. This is bar 10. I pulled it out and I think it's just bees clinging to each other like they would do on a slatted rack. I was in a hurry and didn't stick my finger in to find out if there were comb under the masses, but if you'll look close up, there doesn't appear to be. 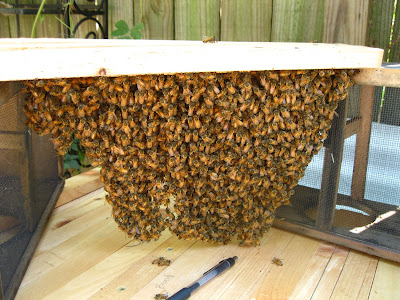 Bar 9 is a brood comb and had capped brood on it, also covered with bees. 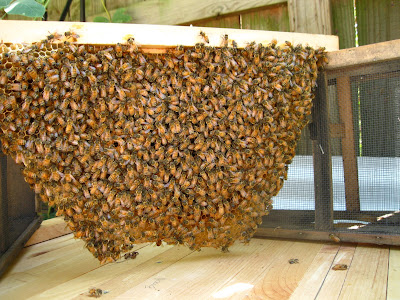 I'm going to continue to feed this hive through October and I'll put an SHB trap in it. I will probably move the follower board close to bar 10 as the cold weather approaches to close their space and make it easier for the cluster.