At the recent Blue Heron inspection, it was clear that both remaining hives are way too light to make it through the winter.  We have committed to feeding them heavily through the month of October and maybe into the first two weeks of November (after which we generally have our first freeze here in Georgia).

I put a baggie feeder and a pint jar in a Boardman inside a medium box for a surround on Thursday.  That's really only 1 1/2 quarts so I plan to check it on Sunday or on Monday morning and probably add some more food.

I really want these bees to live through the winter, despite the fact that they stung gloveless me THREE times while I was simply removing the old empty baggie and adding a new one!

Two of the stings weren't bad - my left hand little and third fingers - but the third sting was on top of a bad burn I got on my left hand knuckle while making baked oven fries (500 degree oven).  My hand swelled up around the burn and was generally uncomfortable until today. 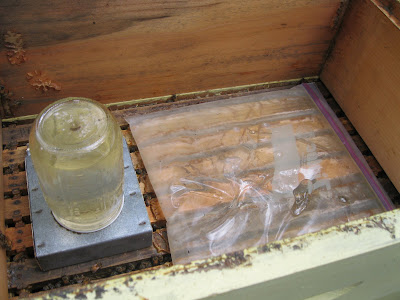 Julia bought at the Bee Club Auction in September this hive top feeder from Mann Lake.  This is the first time she is using it.  It holds four gallons of syrup so she won't have to return to refill it as often as I will.  However, we found a post on Beemaster indicating that bees feeding with enthusiasm can drown easily in this feeder. 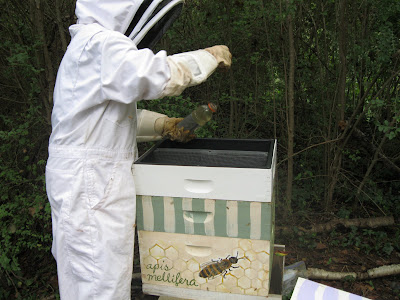 The hardware cloth is not secured at the bottom and the bees in their enthusiasm can end up in the holding tub rather than behind the hardware cloth by pushing through the bottom.  Julia had intended to bring duct tape to manage this problem as in the post mentioned above, but forgot it, so she only filled the side that seemed tight enough not to allow the bees to drown. 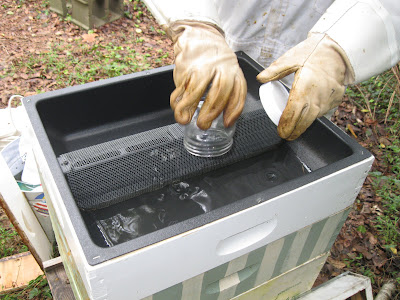 This is how we left it.  I guess the bees crawl up in the center, cling to the hardware cloth and stick their little bee tongues into the sugar syrup and suck it up. 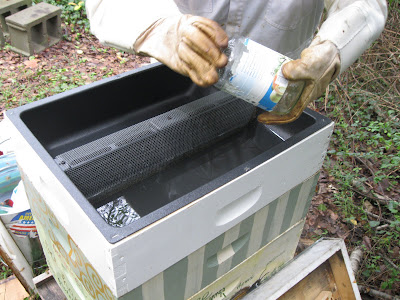 We'll see how this works when we check it next weekend.