Delaplane on the Hive as a SuperOrganism

The Metro Atlanta Beekeepers meeting drew a large crowd to the Botanical Garden to hear Dr. Keith Delaplane, head of the department of entomology at the University of Georgia speak on the beehive as superorganism. 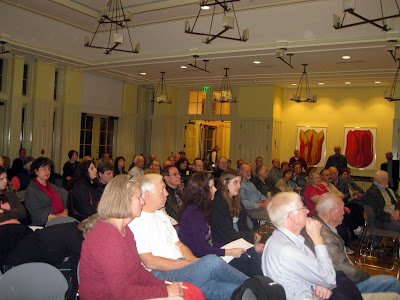 Keith is such an engaging speaker that he kept everyone's interest as he taught us a lesson on genetics and then helped us all to understand the concept of the superorganism. 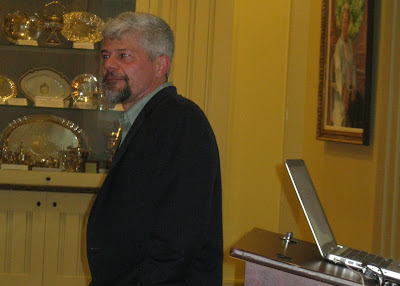 He pointed out that the hive survives best with a genetically diverse population. This is supported by the mating of the queen with 15 - 20 drones, thus bringing a complex genetic pool to the hive.

William Morton Wheeler introduced the idea of the hive as a super-organism in 1911. A super-organism is "a complex, coordinated, individualized system of activities directed at acquiring and assimilating resources from the environment, protecting the system and producing other systems."

Dr. Delaplane said that thinking of the hive in this way means that we can imagine the hive as a total functioning body with the ovaries being the queen; the testes being the drones; the body being the workers; the liver being the beeswax; and the uterus being the brood cells.

He emphasized that the comb is the liver of the hive.  This does not mean that the comb processes yucky stuff in the hive, but rather that it absorbs the dirt, the chemicals, the bee footprints, the cocoons, etc.  So if your bees use old comb to raise brood, in essence they are raising the brood in the liver rather than in the uterus.

Note: (in support of those of us using foundationless frames and thus encouraging our bees to build new comb each year): In a tree, bees raise brood in the newest comb (the uterus of the superorganism). The following year, the same bees would use the former brood comb to store honey and again raise the brood in new comb.

When a hive swarms the organism essentially splits itself in half and one half moves at least 500 meters away from the original colony to avoid competition. From that moment on, both halves of the original super-organism are tasked with surviving the winter. This swarm/splitting occurs in early spring because this gives both halves opportunity to recover from the split and to build up resources to survive the winter.

Delaplane pointed out that all the disease resistant traits are recessive genetically. This, he explained, is because for the super-organism to survive, there must be bees whose main best focus is foraging, fanning, nursing, etc. The traits that promote disease resistance such as hygienic behavior can't be dominant or the bees would all be in the hive dragging out varroa infested larvae rather than out foraging for winter.

So if we are thinking of the hive as a super-organism, then beekeepers might change how they operate in the following areas:
As always, Dr. Delaplane brought his energy and enthusiasm to his talk and I really enjoyed hearing him.

Before I left the meeting, I bought a copy of Cindy Bee and Bill Owens' new book on Honeybee Removal.  I don't think I'll ever do bee removals other than collect swarms, but I wanted to support my friends.