Another Queen Failure - this one from a Fatbeeman Package

The queen in our package installed at Chastain Conservancy was not released by the bees.  I picked up three packages from Don Kuchenmeister (Fatbeeman) for Julia and two for me on March 17.  I dropped Julia's by her house and drove home with my two.  On that same afternoon, I installed one package at my house and saved the other to take to Chastain the next day. 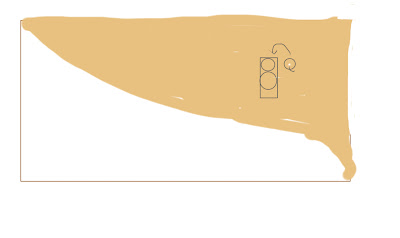 The bees in the package for Chastain were all over the place completely filling the box - not hanging around or organized on the queen cage.  That should have given me pause.  But I didn't think about it at the time.

I checked the newly installed hive for food needs two days after installation.  The queen hadn't been released and I gave them more honey.  Then the temperatures dropped into the 30s and low 40s for about eight days or more.  As soon as it was warm enough, we had our first hive inspection and the queen had still not been released.  So we made the decision to direct release her and she walked into the hive happily.

Now, three weeks after installation, I went to do an inspection with Julia on our own (not teaching).  To my alarm, the only brood in my hive was drone brood.  Egg cells had two to five eggs in them as if there were a laying worker.  I found several cells with two tiny c-shaped larvae in the bottom.  However, instead of a laying worker, we found the queen and watched her put her bottom in a cell to lay.

What this means is that the queen was barely mated.  She was mated enough to think she could lay but she must have only mated with a single drone, if that.  The bees weren't clustered around her in the package because she wasn't giving out queen pheromone and they didn't release her because of that as well.  Don said you couldn't tell by how they hung in the package, and said that I must have bumped the package.  I didn't - it's how the package looked when I got it from Don and also the next morning before I had touched it in any way.  Jerry Wallace, a well-respected local beekeeper, said that the bees weren't clustering around the queen cage in the package was a sign she wasn't mated.

When you purchase a package, if you get to pick it out yourself, you look for a package that has as few dead bees lying on the bottom of the package as you can.  Also since they are filled by estimate, look for one that is pretty full.  Now I know to look for how the bees are hanging in the package to make sure the queen is fully functioning.

Because there is no replenishment of the numbers in a hive that starts as a package, the number of bees is now greatly diminished and this formerly 3 pound package now only occupies a sparse three frames in the hive.  If the queen were properly mated and laying, this would not be an issue because she would have replacement brood and more ready to emerge by this point, but without any replacement bees, this hive is in jeopardy.  The remaining bees will not live for the three weeks it takes for the queen to lay brood and have it emerge.

I called Don and he questioned everything I had done with the hive.  He said I should have called him when the bees had not released the queen.  I didn't call him because once before I had purchased a queen from him; she had not been released and when I called him, he said, "Release her directly."  So rather than bother him, we just released her directly.

He said all of his queens were proven layers and that if I wanted him to replace the queen, I would have to catch the faulty queen and bring her back to him and then he would give me a queen - "I still have three or four," he said.  I said I thought he should give me some bees as well because the $95 I paid for the package is all for naught with no replacement brood at this point.  He said, "Bees are not guaranteed to live."

I told him that I have a hand tremor and that I have never picked up a queen.  He said with a tone filled with contempt, "You are a Master Beekeeper and don't know how to pick up a queen?"

When I went over to Jerry Wallace's house today, he lent me his queen clip and also told me how to "herd" the queen into a queen cage without having to pick her up, so I'll try that first tomorrow and then the queen clip if I can't "herd" her.

I have bought bees from Don for four years and spent a lot of money with him.  I have put him on our supplier list that we give out to new beekeepers (over 100 of them) who take our short course.  Every time anyone asks me where to get bees I recommend him highly.

I wish he had just said, "Gosh, I'm sorry, Linda.  With this cold beginning to the spring a lot of queens have been poorly mated.  Come by and get another one, no problem."  But instead he was angry that I was unhappy and seemed resentful that he would have to replace my queen.

I guess he would rather be angry at me and make a poor business decision in how he handled my problem instead of being nice and helpful to me, a steady customer who has sent him many, many customers.

I told him that in my business, we call what he was doing to me "blaming the victim," and he told me not to lecture him and to get another supplier.

But now that's done, as far as I am concerned.  I will not be giving out his name any more to anyone.  Julia and I are in charge of the MABA short course next year so I will remove his name, since he has essentially suggested that I do so, from our recommended suppliers.  I can't imagine a new beekeeper having to deal with what I had to deal with yesterday and today in my interaction with him.

Post Script:  Jerry Wallace has been in touch with a number of bee suppliers in south Georgia where Don's packages are raised.  Jerry reports that they tell him that many of the queens coming out of south Georgia as early queens are poorly mated because we have had such a cold March throughout the state.  Our winter months were not any of them as cold as the first three weeks of March were in Georgia.  So many of the queens who flew out were not able to mate as often or as well as they would need to in order to be a success in their hives.  I imagine I am not the only one who has called Don to say that the package they received from him had a bad queen.