Bees are Now in Rabun County

Yesterday was a tough decision bee day.  I was going up to the mountains for the weekend so the queen I was supposed to get from the supplier couldn't be brought back to the Chastain hive.  I couldn't move the Chastain hive to Rabun county because it is a failing hive now with few bees since the drone layer queen is not replacing the bees.  I'm only up there about once every 3 - 4 weeks so I wouldn't be able to intervene if it didn't go well.

So what I decided was to take a split from my backyard to Rabun.  They haven't made their own queen yet, so I could put the replacement queen in it.  Then I could keep giving the Chastain package brood and eggs until they finally make a workable local queen.  Michael Bush says that when you have a drone layer, just give the hive a frame of brood and eggs every week until they successfully make a queen.

I went over to Chastain to retrieve the drone layer queen, but in the process and in talking to Julia, I changed my mind.  I've had two angry/mean phone calls from the supplier and two angry/mean emails from him and the idea of driving to Lula, an hour away, to allow him to say critical comments to my face just wasn't appealing just to get a queen.  And since he and I will no longer be doing any further business, what investment would he have in giving me a good queen?  For all I know, he would give me another unmated queen.

So Julia was very generous and gave me a frame of brood and eggs to put in the split I was taking to Rabun.  I had given it a frame of brood and eggs about five days ago, but didn't see a queen cell, so wasn't too hopeful about them.  I put the frame in the split hive and drove to N Georgia, feeling great relief as I passed the turn off to the supplier's house without even considering turning off.

Also the place where I collected the huge swarm on Tuesday was unhappy that there were still a baseball sized bunch of bees still clustered where the swarm had hung, so I stopped there and sprayed those bees with vanilla flavored sugar syrup, shook them into a Tupperware container and when I got to Rabun, added them to the hive split that I had brought.  The vanilla allows the bees to mask the pheromone and generally they will combine without killing each other.  Cindy Bee taught me that years ago.

So Rabun County now has bees at the community garden with plenty of bees, honey and the resources to make a queen.  I left the dead out hive in place there so that perhaps a swarm from the old school nearby where there are bees in the wall might move in as they did last year. 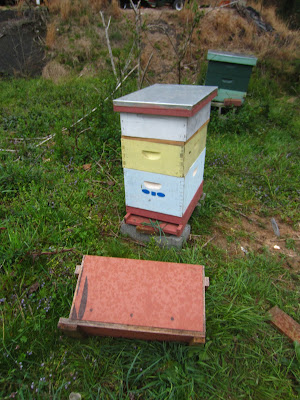 Weather with tornado watches was predicted for Rabun and as I drove into the county at 6:45 PM, the rain started.  I installed these bees in the rain, carrying the hive by myself about 50 yards to the bee site.  As soon as I had shaken in the bees from the swarm, then the rain started to pour down in full force.

What I have learned from this experience:

Always ask your supplier what their policy is should the queen fail in the establishment of the hive.  I did not do that and when I said the queen had failed, his response was that his queens were proven layers.  That was a terrible position for me to be in, since I had a failed queen purchased from him.  It set the situation up for his stance that the problem was with the purchaser rather than the seller.  And this queen was a drone layer from the beginning on March 18.  When selling bees, for good will and for continued support from the purchaser, the supplier should assume the customer is always right.

We will leave the drone layer hive at Chastain so that when we are doing teaching inspections, as we do there for new beekeepers frequently over the spring and summer, we can talk about drone layers, demonstrate how to handle a drone laying hive (hopefully), and talk a lot about how to choose a better bee supplier than we did.

Meanwhile so that we will have three good hives over there, I'll move a split I have made with a queen from Julia's yard to Chastain to be up and running since the queen is already "proven" and laying.
Email ThisBlogThis!Share to TwitterShare to FacebookShare to Pinterest
at 9:24 AM
Labels: drone layer, moving a hive, poorly mated queen, splits