Hope and the Honey Bee

This bee season I have learned something about hope and the honey bee through having two drone laying queens.  The first drone layer was in a hive I purchased as a nuc last year whose queen was obviously not mated well enough to last beyond one year.  The second drone layer was the package I bought from Don Kuchenmeister this year whose queen wasn't mated or was barely mated.  She was never released (she wasn't sending out queen pheromone so the bees weren't interested) and when she was directly released, only laid drones.

In each hive I followed the standard recommendation that I put a frame of brood and eggs into the hive weekly until they successfully requeened themselves.

It may be unfair to attribute hope to the honey bee.  After all, they are incredibly efficient creatures.  Every bee has a job to do every day.  When a different need arises, she moves to the next job.  Each job she takes prepares her for the next until she becomes a forager and wears herself out (and dies) in the service of perpetuating the life of the hive as an organism.

For the honey bee, it is inefficient to use the resources of the hive taking care of drone brood once enough drones have been raised by the hive to contribute to the general environmental needs for mating with a queen in the general drone congregation area.

In The Wisdom of the Hive by Tom Seeley, he says that "the pheromones that provide the proximate stimulus for workers to refrain from laying eggs come mainly from the brood, not from the queen."(reviewed in Seeley 1985; see also Willis, Winston, and Slessor 1990).

So giving the hive a frame of brood and eggs brings a pheromone into the hive emitted from the brood that helps the hive know that there is the possibility of a queen or at least the perpetuation of the hive through new workers - even if there is not a current queen or if there is a queen that they don't like.  In both of my drone laying hives, shortly after the first frame of brood and eggs was added to the hive, they began casting out the drone brood, ripping them out of their cells and throwing them in front of the hive for the birds to eat.

Here's what it looked like in my backyard.  And here's what Noah and Julia photographed on a visit about a week after April 16 when I gave the Chastain drone-layer hive a frame of brood and eggs. 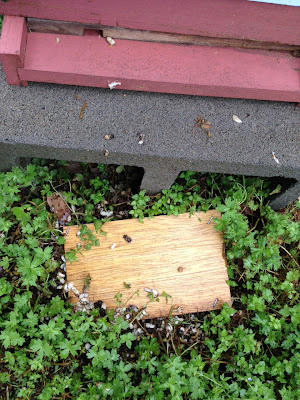 Look at all the dead drones in the grass at the front of the hive at Chastain! 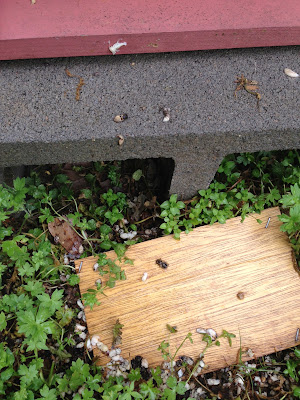 At the point of these photos both in my home apiary and at Chastain, each hive had either killed the drone-layer or appeared to be planning to cast her out.  The drone laying hive at my house had chewed off the wings of the drone laying queen in preparation for pushing her out of the hive.  With the frame of brood and eggs, they know a good queen is now possible even though neither hive made a queen cell from the first frame of brood and eggs given to them.

Today at Chastain, there was some capped worker brood from the frame of brood and eggs that I gave them on the 16th.  That brood will probably emerge in three or four days to help the hive, but they did not make a queen cell from those eggs.  I had to transport the frame for 30 minutes.  I put it in a nuc box but didn't really have an appropriate way to keep it warm and probably none of the eggs were good enough when they were finally in the hive about 45 minutes after they were removed from their home hive.

In my hive at home with the third added frame of brood and eggs, they now have four or five queen cells on the frame I most recently added and are probably now home free (assuming the emerging queen survives her mating flight).  The hive at Chastain today got a good frame and I'll give them another next week and the next, if that is what it takes.

Michael Bush says it takes several weeks of weekly addition to make it work.  He is a great fan of adding brood and eggs.  Here's what he says:

"There are few solutions as universal in their application and their success than adding a frame of open brood every week for three weeks. It is a virtual panacea for any queen issues. It gives the bees the pheromones to suppress laying workers. It gives them more workers coming in during a period where there is no laying queen. It does not interfere if there is a virgin queen. It gives them the resources to rear a queen. It is virtually foolproof and does not require finding a queen or seeing eggs. If you have any issue with queenrightness, no brood, worried that there is no queen, this is the simple solution that requires no worrying, no waiting, no hoping. You just give them what they need to resolve the situation. If you have any doubts about the queenrightness of a hive, give them some open brood and sleep well. Repeat once a week for two more weeks if you still aren't sure. By then things will be fine.

If you are afraid of transferring the queen from the queenright hive, because you are not good at finding queens, then shake or brush all the bees off before you give it to them.

If you are concerned about taking eggs from another new package or small colony, keep in mind that bees have little invested in eggs and the queen can lay far more eggs than a small colony can warm, feed and raise. Taking a frame of eggs from a small struggling new hive and swapping it for an empty comb or any drawn comb will have little impact on the donor colony and may save the recipient if they are indeed queenless. If the recipient didn't need a queen it will fill in the gap while the new queen gets mated and not interfere with things."


I've now added brood and eggs several times to these hives - twice to the Chastain hive and three times to my hive at home.

I love thinking that they are hopeful for their future and trust that they will be able to make a functioning queen.

Despite that romantic thought, in fact what probably is happening is that they recognize that there is healthy brood now and they need enough energy to manage the healthy brood well, so to that end they get rid of the energy sucking drone brood that is way more than they need. 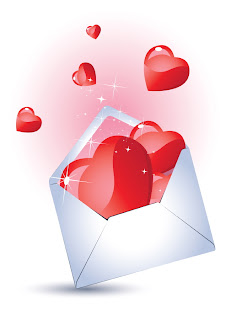