When I got back from Rabun County this afternoon, I went straight over to Morningside.  I've taken frames of brood and eggs out of that hive, but I haven't really inspected the survivor hive in about a month and I haven't ever opened the split hive up there.  The split was made on March 9.

I started with the split.  The queen, if they successfully created her and she mated successfully, should be laying by now.  She would just barely be laying.  When the bees make a queen from an egg, it takes 16 days for the queen to emerge.  Then she spends four or five days in the hive to reach sexual maturity.  (We're up to March 29 at this point).  Then she may mate over two to four days, making more than one mating flight.  (We're up to April 2).  Then she returns to the hive to begin her forever job as an egg-laying machine.  (April 3).  So she may have been laying for about 9 days at most.

Here is the opened queen cell, so when I got into the bottom box (first), I was pleased. 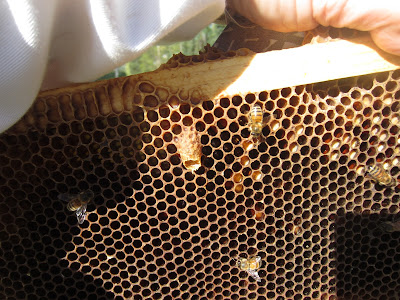 I was pleased to find that she is indeed laying and the bees seem happy.  They have lots of empty drawn comb and have drawn some nice comb.


In the second picture you can see stored pollen and a little capped worker brood.  In every empty cell there is either an egg or larvae.  Really good results of this split.  Since larvae is capped at about 7 days, those capped larvae in the center are probably her first capped brood! 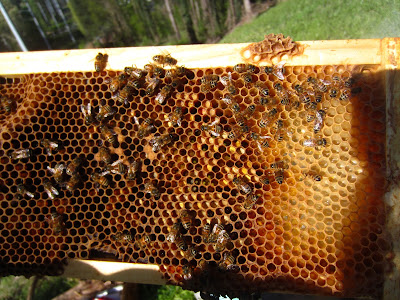 The Morningside survivor hive I first inspected this year on February 24.  I haven't looked deeply into it since then (horrors!).  I have opened it to steal a frame of brood and eggs to help other hives.

Well, it is boiling over with bees.  While I was lighting the smoker (before I put on my veil), I got stung twice in the head by bees blown into my hair from that hive!  I opened the hive planning to add a box but ended up adding two. 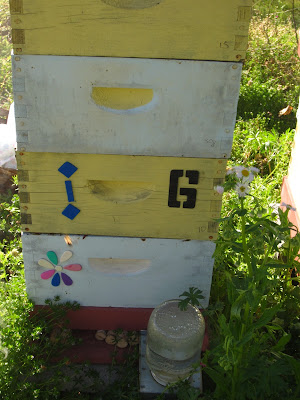 The top box was filled with almost fully capped GORGEOUS white comb honey.  I marked the box as a possible cut comb honey harvest with a magic marker.  I brought a box of foundationless frames to give them for more honey.   I put it beneath the white capped honey box because I didn't want the honey to make the queen think the hive was out of room.

I was so overwhelmed that I forgot to take a photo of the white capped honey.


I then went into the next box and both it and the box below it were full of brood.  The queen had nowhere else to lay.  This is a real problem.  So I took another hive box and checkerboarded the brood frames with empty frames in hopes that I can prevent a swarm.  I didn't see swarm cells but I didn't go into the bottom box.


The photo below was an interesting frame - it was drone brood on either side with worker brood in the center.  I think it must have been a drawn frame that I put in the box to act as a ladder so the queen used the cells by virtue of the size of the cells....the large ones for drones and the small ones for workers! 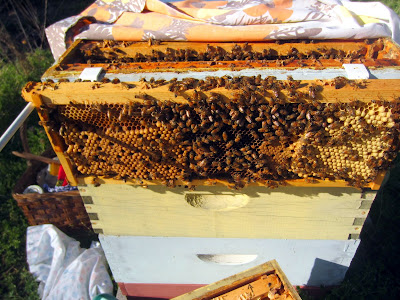 Perhaps if I have time this weekend, I'll make a split (or two) from this hive and take one of them up to be the second Rabun hive.  I was hoping for a swarm from the school wall hive but today when I walked up there, the school bees that have been there for years were dead and gone.