The bees are rid of the queen.  I've added weekly a frame of brood and eggs for the past three weeks.

Today I saw queen cells - at least FOUR of them - on a frame of brood and eggs I left them last week.  The best looking one is below.  The second photo is blurry but there is another queen cell.  I saw two others - all on this same frame from the nuc Julia gave me the queen cell to use to start it. 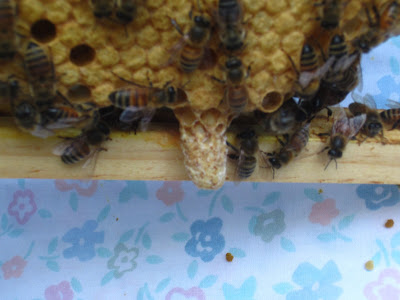 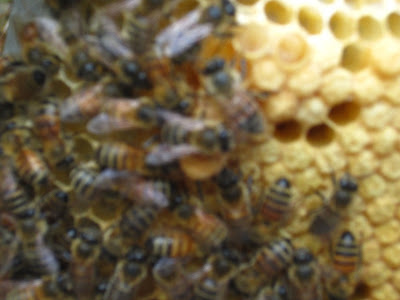 Michael Bush says that with a drone layer, you need to give them brood and eggs three times and then they will probably make a successful queen.  I hope this time, they get a good one.

I'm so glad I got to see this process so close up - watched them remove the drone brood in a good housecleaning; saw the old queen with her wings chewed almost off; now see they are making a queen cell.  From just watching the front of the hive, you'd have no idea this was going on!

The brood you see is capped brood from the frame of eggs I gave them last week.  It was a good testament to why a beekeeper should have a nuc or two going all the time.  I took a frame out of a nuc.  It was two large tear drops of newly drawn wax, covering about 2/3 of the frame.  Almost every cell had an egg in it.  There was no honey or capped brood.

These bees managed to make four queen cells from the eggs.  So by the middle of May the hive should be queenright again.

They are not missing the nectar flow which is currently going.  They have really been storing up honey.

Note:  Each time I have opened this hive, I've had to squash at least 30 small hive beetles.  Today I only saw five small hive beetles the whole time I was fooling around with the hive.  I need to order nematodes which I have not done yet.