Jeff and I decided to try out a "new" small hive beetle trap.  I put the "new" in quotes because I think I have owned the kit for this trap for three years, but never have used it.  It is from David Miller in Jackson, Tennessee and I bought it at the Young Harris bee institute about three years ago (maybe four???)

Jeff put it together and we decided to test it on one of Sebastian's hives, so we installed it on Sunday.  We'll follow up and let you know if/how it is effective.

Below Jeff is deciding which extension to use - it came with an extension to make it useful on an eight frame hive which is what we are running at Sebastian's house (and everywhere). 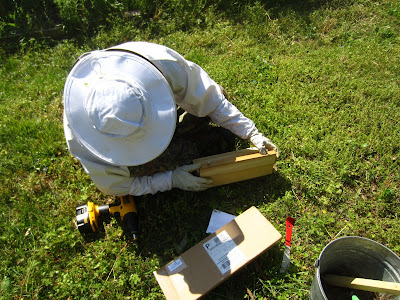 Here Jeff is adding the section which is screwed onto the trap.  The trap goes on the front entry of the hive.  It provides an entrance for the bees with a screened floor so that the small hive beetles fall through the screen as they enter the hive. 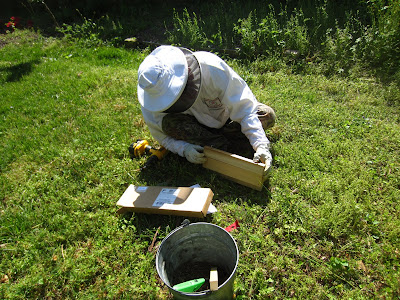 Below you can see the trap attached to the hive, waiting for the bees to notice their new entrance. 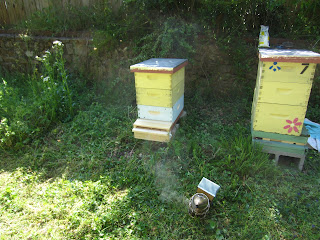 Jeff slid in the oil trap.  It comes in on the side, is comprised of three chambers, each filled with oil to drown the icky creatures. 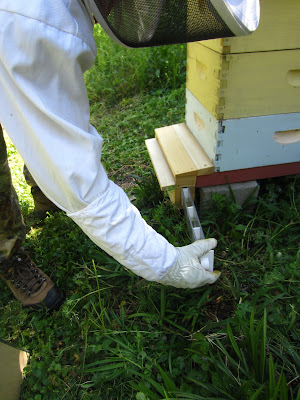 The bees were a bit confused about their entrance, but they were beginning to figure it out when we left the apiary. 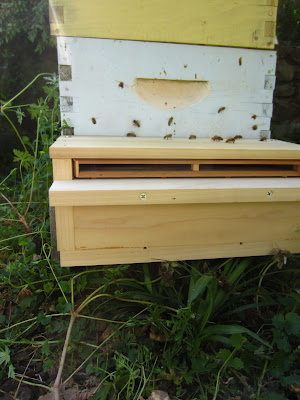 The trap kit included some soft screen to put over the inner cover opening to keep SHBs from entering through the top.  We didn't have a staple gun with us so we didn't put that on the hive, but may at our next visit (I have to get over my fear of the staple gun which is IMMENSE).  However, advice in the kit says that the bees may propolize the soft screen.......hmmm, now there's a rationalization for not getting out the staple gun!