Bee Art at the Hambidge Center in Rabun County

On Betty's Creek Road in Rabun County is a gem of a place called the Hambidge Center.  Mary Hambidge was an artist/weaver who started the Hambidge Center in 1934.  She believed in art and sustainable farming.  I took a weaving class there about 30 years ago.  The Center has a gallery associated with it where art is displayed and sometimes sold.

My friends and I went to the mountains for the Memorial Day weekend.  We walked a trail on the Hambidge property (it covers 600 acres) and visited the Hambidge Center Gallery.  My dog Hannah swam in the N Georgia creek on the trail! 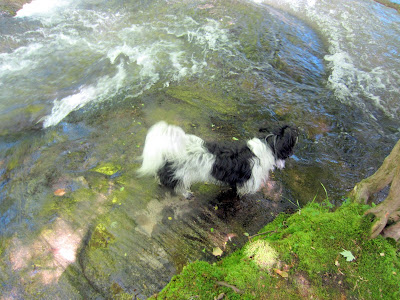 To my surprise one of the items on display was this: 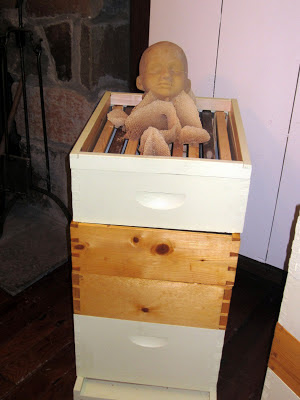 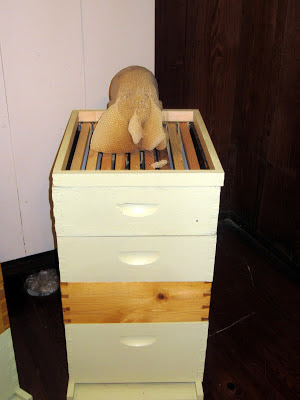 The sculptor had put sculpted busts into the beehive and let the bees have their way with them!

My friends put me with one of the hives for a photo: 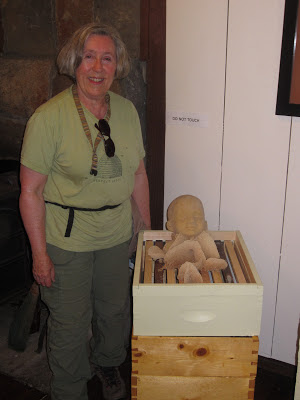 While in Rabun county, I drove to the garden to check on my hive there.  To my shock as I drove up, I could see that the top of the hive was upturned on the ground.  The hive had the inner cover slightly askew.  I ran over to the hive.  One of the gardeners said he thought the wind had blown the top off.

I checked on the hive which didn't need a new box, but I gave them a new box anyway since I may not be up there for another month and the blackberry is in voluminous bloom right now in that county.  I don't understand why the bees don't do really well in that location, but they don't seem to.

I left the hive with a brick on top of the top cover.