This morning started with the dentist - no fun ever.  I had planned to go to the Chastain Conservancy to check on the bees there after my visit to the dentist.

I arrived at Chastain to discover that in my stress over the dentist, I had left both my camera and, more importantly, my smoker at home.  I live about 20 minutes from the site so I decided to go into the bees anyway, using hive drapes and trusting in my slow movements to keep the bees calm.

First I opened the drone-laying Don Kuchenmeister hive.  They have a queen cell but no queen yet so for insurance I wanted to move another frame of brood and eggs from our nuc that lives at Chastain.  I removed a frame to make room for the brood and eggs and promptly was stung on my left hand.  I covered the hive with drapes and opened the nuc.

The nuc is full of bees.  It has rained a lot over the past few days and the bees were none too happy with my intrusion.  A bee flew under my bee jacket and stung me through my t shirt.  Then as I removed the frame, checked to make sure I wasn't taking the queen, and shook most of the bees off of the frame, I got attacked full force.  I usually wear hiking pants to inspect the hives - they are loose and I rarely get stung through them.  This morning I had on jeans and got five stings on my legs during this process.

I had a break in the afternoon and came home to walk my dogs.  I thought I might stop by the Morningside garden to see if the pesticide kill is still ongoing.  I stopped and walked up to the hive - no protective gear - all in my work clothes.  I walked up to the hive as I often do in my street clothes and took a photo with my phone.  There are a lot of new dead bees so the kill is still happening. 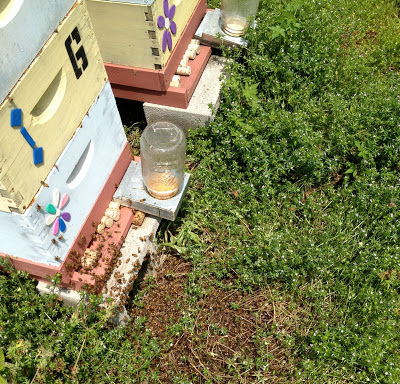 One of the bees really didn't appreciate my presence.  She began head butting me on the side of my head, the back, and finally she landed on my nose right by my nostril where she planted her stinger.

I've gotten stung once before in the nose and it was the worse sting ever. This one matched it.  I began to sneeze and sneezed once per second all the way to the car.  In the car I sneezed all the way to my house where I took Benadryl and put ice on my nose!

Then, lucky, lucky me, my dear friend Julia called me to tell me that she was going to pick up a swarm at Atlantic Station.  She doesn't want/need it and wants to give it to me.  I was thrilled but I wasn't going to be home from work until around 8 PM.  Julia said she would leave the swarm in my backyard and I could install it when I got home.

Julia sent me photos of the swarm collection.  Atlantic Station is a pedestrian mall in Atlanta near Midtown.  Here's what she found when she arrived: 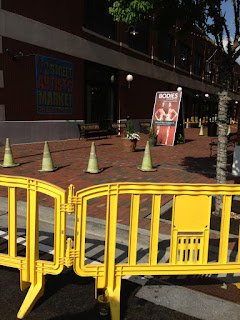 I'm not sure if the blockade was for the bees or for something else.

You can see the bees on the center part bench below.  The are clustered on one front leg.

Here they are up close: 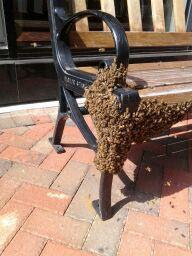 Julia brushed and cajoled them into a large file box that she covered with screen. 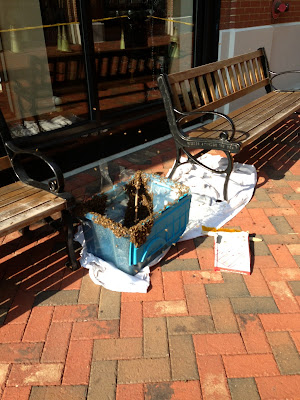 At my house when I arrived at 8, I found the bees clustered together in the box - about the size of one cat.

I set up a two box 8 frame medium hive with the insert in the screened bottom board.  I shook the swarm into the hive: 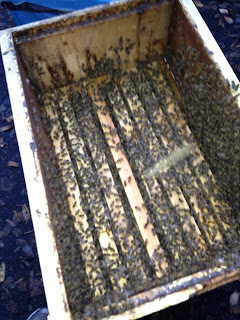 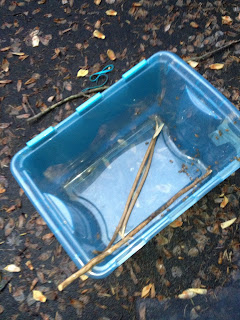 Julia, with all the brushing, wasn't 100% sure that the queen would have escaped without injury, so she suggested that I put in a frame of brood and eggs.  I took one from the package hive in my apiary and put it into the hive box before shaking the bees.  And then I got another sting on my finger.

While I was out there, even though it was getting late, I decided to check and see if the Mississippi queen I had installed in a nuc was released.  I opened the nuc and to my dismay, my nuc making was unsuccessful.  Most of the bees had returned to their original hives (I should have closed it up for 24 hours, but I didn't) and the queen was in her cage surrounded by a handful of bees, but not released.

I pulled the cage out, jumped into the car, drove to Ron's and put the queen cage in his queenless hive that we gave brood and eggs to on Saturday.  The bees seemed eager to meet her.  Her queen cage is the plastic item at about the center of the picture with bees crawling all over it. 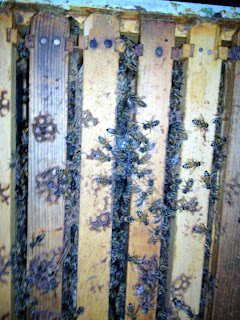 And I got my last sting of the day....the best news of the day was that now that I have developed a tolerance for bee stings, my nose stayed its normal size for the rest of my day in the office!

Truth be told, I get stung all the time.  Jeff says that if I would just wear gloves......, but in fact I rarely get stung more than once in a round of inspecting five or six hives.  Today was rather constant - a bee-zy, sting-filled day.