Yesterday we had about a 2 hour break of sunshine and blue sky - followed, of course, by grey sky, clouds and, you guessed it, more rain.  It's raining now.

It was like the eye of the storm that I remember from hurricanes, growing up on the Mississippi river.  We would take a breath during the eye as it passed over, but the hurricane would start again.  I know it dates me, but the one I really remember was Hurricane Audrey in 1957.  I remember the eye because of the startling contrast to what was going on just minutes before - I was little and this fierce weather really scared me.  Hurricanes would devastate south Louisiana and then would come up the river to Natchez, MS where I lived.  By then they would be weakened and still wreaked havoc.

In our small calm of sunny weather, I opened the split to see if the new queen were laying and I opened the drone layer hive to see if their new queen had succeeded.  The split was doing great and had wall to wall cells of eggs and tiny c-shaped larvae.

The split was made on April 13, so the queen should have emerged around the 29th.  So checking on the 5th might have been pushing it.  We've had bad weather and I was concerned she might not have been able to go on a mating flight but she had and was working hard.

In the drone layer colony, I didn't find a laying queen.  I did find a queen cell on the frame I had given them that had been ripped open from the side, indicating that a queen had emerged, and I found a queen cell opened appropriately at the tip.  The last frame of brood and eggs I gave them was on April 15.  Doing the math, at the longest, the queen should have emerged on May 1 and this was just May 5.  We've had terrible weather for most of those days.  So either she hasn't mated; she was lost in a storm; she has mated but hadn't started laying. 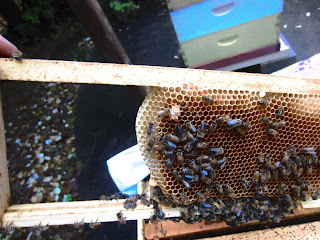 So as a panacea, as per Michael Bush, I took a frame of brood and eggs out of the Patty swarm hive and gave it to the drone layers.

I'm leaving for Young Harris on Thursday and this way they'll have a chance if they need it.

I'm stopping by Chastain tomorrow and taking a frame of brood and eggs out of our nuc there to put in the Don Kuchenmeister drone laying hive tomorrow if I have enough time.