Tom Seeley is coming to town.  (Author, scientist, and probably the world authority on how/why honey bees swarm)  Really he's coming to Georgia to teach at the Young Harris Beekeeping Institute on Friday and Saturday.   He agreed to stop and speak to our bee club on Wednesday night before driving up to Young Harris. 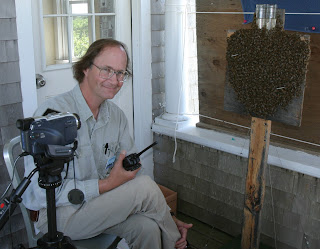 Unfortunately our bee club has this awful policy of just one person hosting the guest speaker for dinner.  I wish we shared the policy of some other clubs such as the Macon County Beekeepers in Franklin, NC.  When I went to speak to that club, they invited any club member who wished to join us to come to the restaurant with the speaker so I got to eat with ten wonderful beekeepers before going to give my talk.

The person who invited Tom Seeley to speak to our club literally said she was going to be selfish and not allow anyone else to join her in having dinner with him.  I have to work right up until fifteen minutes before the meeting, so I wouldn't have been able to eat with him, even if anyone else were invited to go along.  But think how inspiring it would be to new beekeepers to get a chance to sit and have a casual dinner conversation with him!  Oh, well.

We have great speakers at Metro - Juliana Rangel who was Seeley's assistant in the Honey Bee Democracy study, Billy Davis, Keith Delaplane (comes every year) have all spoken to our club, for example.  They each get taken out to dinner by a host before the meeting.  I wish the policy would be changed to include anyone who would like to go and is willing to pay for their own dinner.

I am so excited because I will get to hear him speak on Wednesday night and then he is giving three talks at Young Harris.  Luckily I'm not scheduled to teach in conflict with him so I'll be able to hear him give all three talks.  I'll take notes and share them with all of you.  Young Harris is usually sold out by now but they've increased registration to 150 this year, so there still may be some openings.

But, if you are in Atlanta and would like to hear Tom Seeley talk about bees, the Metro Atlanta Beekeepers Association meets at the Atlanta Botanical Garden in midtown at 7 PM on Wednesday night.  He will be speaking in Day Hall - it's the first large building you come to after leaving the entry building.  You don't have to be a member to come to the meeting and there's not a charge to attend.  You can either park in the parking garage (there's a fee) or in the neighborhoods across Piedmont Road and walk over.

It's a great beekeeper opportunity!  Join us.

There's a fabulous exhibit at the Garden right now of large creatures made of plants.  Day Hall where Seeley will be speaking is just past the two cobra plant sculptures.

Here, for example, are the fish sculptures that both spew water and spin around, much to my granddaughter's delight: 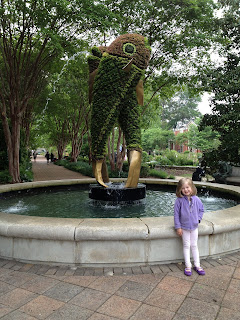 And here is the monster - we call him the Gruffalo because he looks like the Gruffalo in a book Lark (my three year old granddaughter) likes: 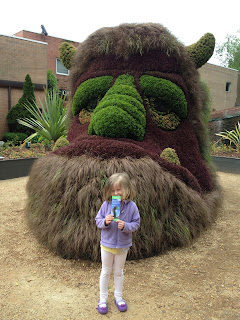