Jeff and I checked on the Morningside hive on Saturday.  It was exactly a week ago that I discovered the pesticide kill in front of the hive.  I had been back there for the next three days after the discovery and there were no more new dead bees.

But on Saturday, thousands of new dead bees were in front of the hive.

What this means is in my mind one of two things:

1.  Someone is spraying their garden on Thursday or Friday and the bees are getting into their flowers and dying.  We've had enough rain that after the spraying, the rain washes off most of the poison, but the neighbor who sprays did it again this Thursday or Friday, bringing a whole new wave of thousands of deaths.

2.  The bees are getting nectar from Carolina Jasmine which is blooming in force right now and is poisonous to bees.

The first is more likely than the second.  If the second were the case, then there wouldn't be these gaps in bee deaths.

I'm sick about it - my best hive being brought to its knees buy someone's uncaring act of poisoning their garden.

Jeff and I took the whole hive apart again.  No pesticide smell, but fewer bees, although this is quite a hive. 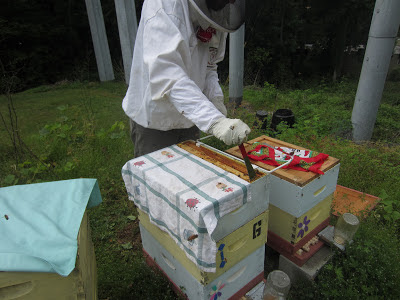 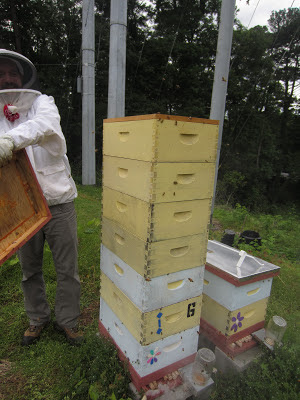 Email ThisBlogThis!Share to TwitterShare to FacebookShare to Pinterest
at 8:49 PM
Labels: bringing out the dead, dead bees, Morningside, pesticide kill