Queenly is as Queenly Does

So today was the day to check on the red dot Mississippi queen in Ron's hive.  First I went to check on Sebastian's hives.  The first split hive was doing well.  The queen was laying.  I saw one frame that was almost 100% eggs!  They were also storing honey but not going gangbusters so they didn't need another box.  I gave them a powdered sugar shake and moved to the survivor hive.

The survivor hive over there was also doing really well.  They had completely filled the top box and were putting honey in odd comb formations between the boxes so even though there was one unused frame in the top box, I thought they needed a new box.

I am using the ventilated hive cover to help do powdered sugar dusting: 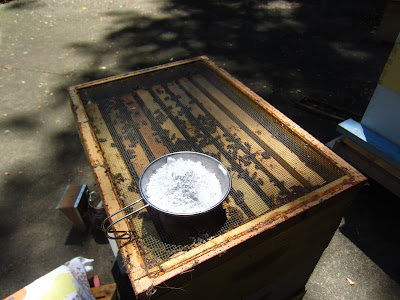 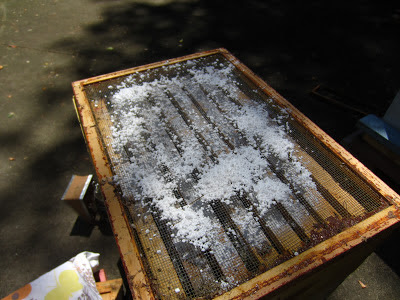 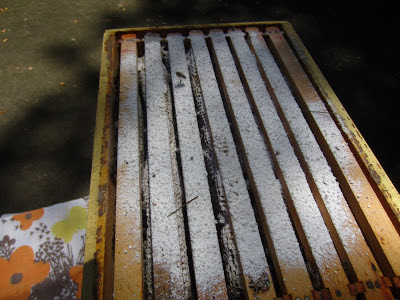 It's much simpler and faster than using a sifter.  I put one Sierra cup's worth of sugar on each hive on top of the frames in the brood box. 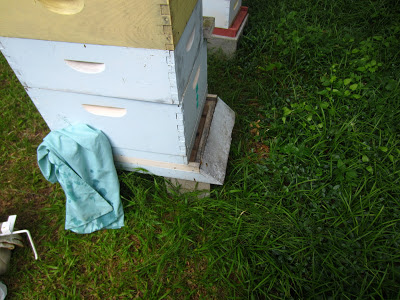 I took a frame of brood and young larvae from Sebastian's large hive to give to the hive at Ron's.  I put it in a green pillow case to keep it relatively warm; closed up the hive; and drove to Ron's.

At Ron's my first concern was the Mississippi Queen.  Had she been released now that I removed the old queen on Monday?  I opened the hive and found her still in her queen cage.  The bees were acting eager and friendly around the cage and had eaten all but the last sugar barrier.  There were dead workers in the queen cage.  I opened the queen cage and direct released her.  She moved rapidly into the hive box and I cheered her on her journey and her life. 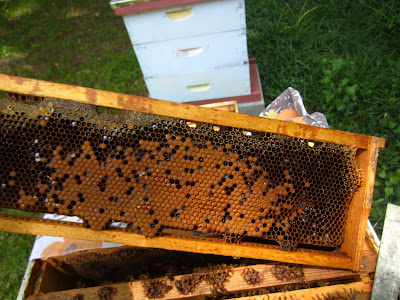 I also added the frame of brood and young larvae to the same box in the position where the queen cage had been.  That should give a little boost to the hive and keep them busy.   I marked that frame as Sebastian's R's Hive so that I wouldn't give the Mississippi Queen credit where credit wasn't due and left, hoping that the next time I visit, there will be new eggs on a different frame laid by her.

Before I walked away I glanced at the hive box (no bees in it) next to the Mississippi Queen hive.  There on the side of the hive was a newly hatched luna moth.  So GORGEOUS.  She probably had her cocoon on the side of the hive just under the top cover.  They have to dry for two hours before they can fly.  Here she is in her regal glory: 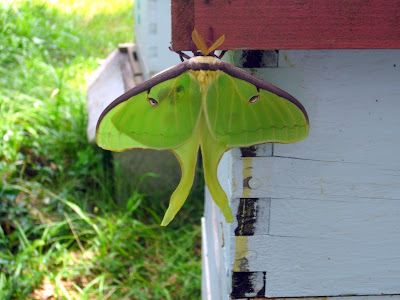 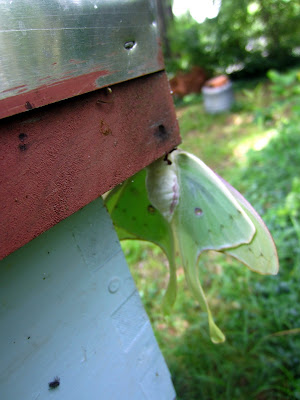