Free bees is a term that typically people apply to a swarm that they capture.  They are free, but it's some work - you have to go to the site, shake the bees into some kind of container, wait around for stragglers to join their mother, drive them to your apiary and install them in a box.  Yes, they don't cost any money but they definitely cost you in time.

Real free bees are the kind we found at Stonehurst Place this weekend.  We arrived for our inspection that we do every couple of weeks.  I've been in Colorado at a professional conference so we haven't been to Stonehurst in three weeks this time.

You'll remember our terrible robbing incident at Stonehurst at the end of bee season last year.  So we went into winter with one dead hive that I took down to one box and left as a swarm lure.  Then we had two live but small hives.  One hive survived the winter well enough but hasn't been bursting at the seams.  It's still only three boxes tall - enough for winter but not to rob.

The other hive dwindled and died - I don't think I reported it here, but we determined it was almost dead on May 2 and there were no live bees in it on May 19.  The hive did have honey in it - almost a full box.

The hive in the middle is the live hive that made it through the winter. 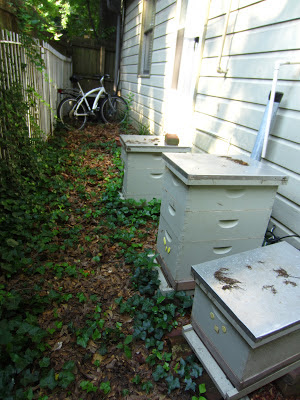 So this Saturday when we arrived to check on the one live hive at Stonehurst, to our surprise there were  truly FREE BEES!  The "dead hive" had been occupied by a swarm - and it had ivy growing up the front of the hive box! 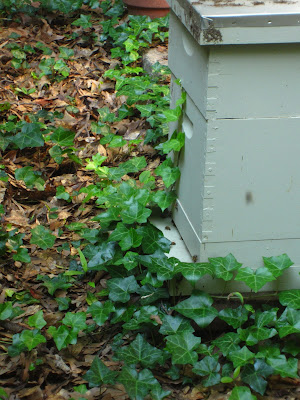 We checked on the brood and found that there was capped brood that was medium biscuit in color (per Billy Davis).  This means that it was capped about two weeks ago.  So the swarm must have moved in just after Memorial Day.  We saw the queen - probably the gift of a new beekeeper whose newly purchased nuc swarmed.  She had a red dot on her back and was long and lovely: If you look closely, you can see eggs in all of those cells.  She's hard at work and we were thrilled to have FREE BEES at the Stonehurst Inn.

I don't think unless some miraculous nectar flow happens that we will get any honey from Stonehurst this year, but it's nice to have two hives that we can work on keeping healthy through the winter.
Email ThisBlogThis!Share to TwitterShare to FacebookShare to Pinterest
at 11:38 PM
Labels: free bees, hive as swarm lure, marked queen, swarm