A Funny Thing Happened on the Way to Making a Nuc

When I brought the terrible queen home from Ron's on Memorial Day, May 27, I made a nuc to house her and closed it up so that the bees would have 24 hours without a queen.  Meanwhile the queen who was in a queen clip, slipped out of the clip and was wandering around in the pillow case in which I brought her home.  I left her there over night and the next morning, she was dead.

I added a frame of brood and eggs to the created nuc and decided to see if it would make a go of things. 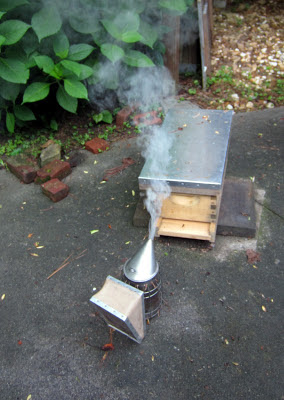 The little nuc has been looking pretty happy.  Bees are flying in and out.  When I've peeked inside, there seem to be plenty of bees.

So this weekend I thought I'll bet they have a laying queen, so I'll move them out of this box and into a medium hive body.

I opened the hive and found lots of bees and one frame on which there were eggs and brood.

This was quite a funny thing.  On one side of the frame were cells with an obvious laying worker: five and six eggs in the cells. 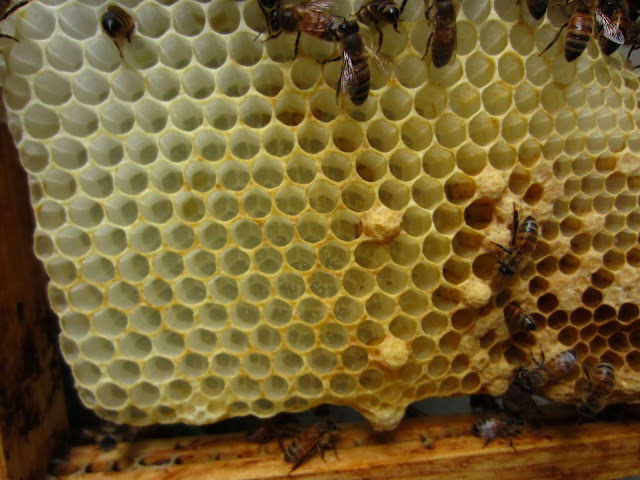 On the other side were single eggs, tiny larvae and small c-shaped larvae.  - sorry for the blurry photo, but you can see the light biscuit flat-capped worker cells.  What does this mean? 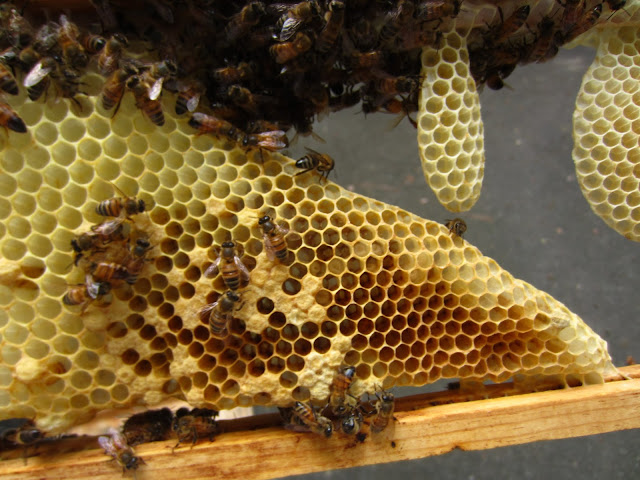 Did a laying worker develop as the queen was getting mated?  A laying worker only results in drone brood and the brood on one side of this frame is flat-capped like worker brood and single eggs.  However, clearly there is a laying worker or maybe the queen just didn't quite get the hang of it at first. I know sometimes they lay multiple eggs in the cells when they are starting out.

At first I set the frame away from the hive, thinking I would see what bees returned to the hive.  But then I thought there clearly is a single egg laying queen....so I returned the frame to the hive. 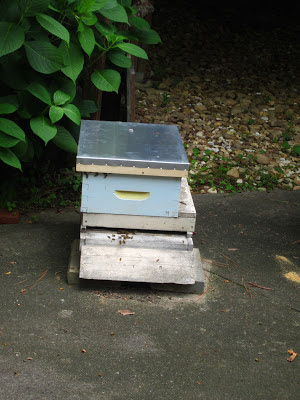 So here it is in the new configuration.  Bees are again flying in and out.  I gave them a new frame of brood and eggs from the Morningside nuc.

Every time I steal a frame of brood and eggs from that nuc, I think about My Sister's Keeper, that novel about the little girl whose parents had her to provide body parts for her dying sister?  But the nuc, like the little girl, seems to keep on keeping on despite my constantly raiding it for brood and eggs.

I'll leave the new hive for a while and we'll see what develops (or doesn't).

I did add an entrance reducer after I took this photo.

Email ThisBlogThis!Share to TwitterShare to FacebookShare to Pinterest
at 12:03 AM
Labels: biscuit colored cappings, laying worker