We moved bees and laughed at ourselves the whole time.  Sebastian is moving and the two hives of bees at his house had to move as well.  Jeff and I were up for the job and the logical (it seemed) time in our busy lives to do it was Friday night.

Neither of us thought about the fact that Friday was the Summer Solstice and thus the longest day of the year.  The sun didn't set until 8:51!!!!!  I'm very busy these days and Jeff and Valerie have a baby who wakes them up every morning at 5 AM so neither of us were really full of energy at 8:51.

Nonetheless, we drove to Sebastian's house and outfitted Sebastian in my bee jacket, gloves and veil.  He and Jeff were to be the brawn of this move and I was the person manipulating the hives (and therefore getting stung).  Here are our steps:

1.  We lit the smoker - oops, well, I left the lighter at home, but Jeff had a lighter in his fantastic car storage compartment (more about that later!).  We smoked the bees to get the front porch stragglers to go inside the hive.

2.  We closed both hives up with screened wire with Jeff shooting the staple gun. 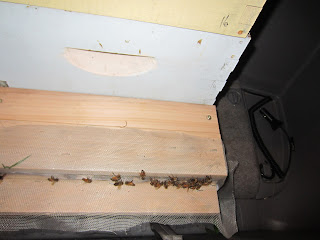 3.  We took the top two boxes off of the tall hive, set them on a bottom board and gave them a top for the trip.

4.  We strapped both hives tight together and bungee cord strapped the top box combo. 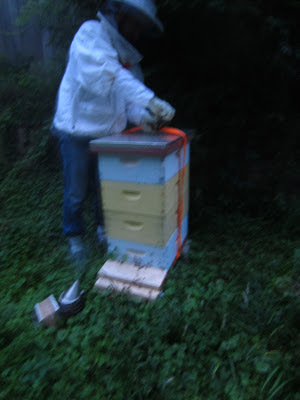 5.  Jeff and Sebastian loaded the three hive box combos into Jeff's car.   It was getting dark, but Jeff in his amazing car storage bin had two flashlights - a mag light and a small silver flashlight that I had put in his Christmas stocking a couple of years ago.

6.  Meanwhile an unhappy bee flew under my long-sleeved shirt, under my untucked t-shirt and stung me right in the tummy - ouch!  I'm so used to wearing a jacket that it never dawned on me to tuck in my shirt. 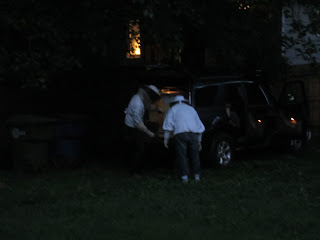 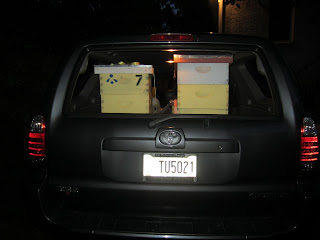 Note:  We left a hive box - a single box - on a bottom board with a top cover to allow any wayward bees to have a place to hangout.  I'll go back and move whatever bees are still there tomorrow.

7.  With three boxes in the car, we drove slowly to Sebastian's new house.

8.  Jeff backed carefully into Sebastian's new driveway and we began the unloading process - we had to unload the cinder blocks and place them as well as the hives. 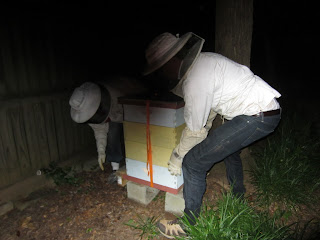 9.  When the hives were placed, we undid the straps.  Then I took off the top of the big hive to add the removed honey supers back.  OMG, those bees were all gathered at the top of the box, loaded for bear and wondering what the %$#@*** had just happened to their happy abode.

I got stung on three fingers of my right hand - each finger getting several stings. 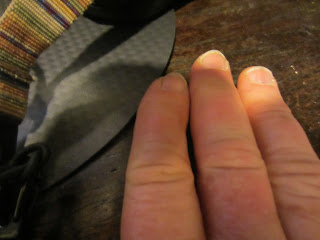 10.  For the do what I say, not what I did crowd, we would have been better served, I think, to remove the screen wire from the front of the hive before taking the top off, but I didn't think of that.

11.  We put grass on the fronts of both hives to help them reorient, leaned the inner cover from the fake hive against the fence to allow those bees to find their way home and headed for Jeff's car. 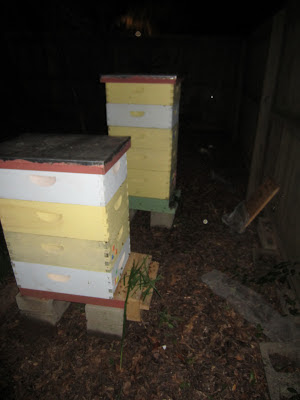 12.  In the car, I had Benadryl - the dissolve on your tongue kind - but no way to open the package.  In his magical car storage bin, Jeff had a sharp knife and opened the package for me.

I'll go anywhere with Jeff in his car any time - that man is prepared for anything.....well, he didn't have a glass of wine and I sure could have used that, but he commented that it would be illegal to have that in his car.