So Why Go to Lithuania on a Beekeeping Tour?

I got an email from Simona Cibirkaite at the Visit Lithuania travel agency in Vilnius.  The trip sounded interesting and I thought it would be neat to meet beekeepers from another country.

When Julia, Noah and I signed up for this, it sounded like a lark and lots of fun.  We've travelled together before - to a beekeeping conference in Massachusetts last summer and every year to Young Harris where although we don't drive up together, we hang out for the whole conference.

My mother was certain I was never coming back home.  My children wanted to know where my will was.  My son-in-law was sure it would be like the tours in Everything is Illuminated.  But despite all of the doubt from others, we had a fabulous experience in Lithuania and I'd love to go back again.  What a gorgeous countryside and what interesting beekeeping traditions were there!

When we got there, we were so pleasantly surprised to find out that beekeeping is a cornerstone of Lithuanian history and culture.  Our wonderful guide, Lukas, explained on the first day that beekeeping has been an important part of Lithuania for hundreds of years (I think he may have said thousands!).  The goddess of beekeeping,  Austėja, is a very common girl's name in Lithuania.

There are actually two gods of beekeeping in that country, Austėja (pronounced ous-stay-uh) who is the goddess of fertility and a protector.  In 2005 Austeja was the fifth most popular girl's name in the country, according to Wikipedia.
Here is Austeja: 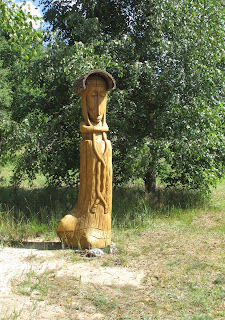 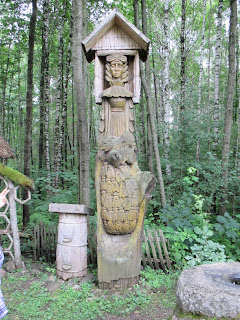 Austeja at the museum of ancient beekeeping on our next to last day.

The other pagan god was Babilas - he was like a drone - a sort of good for nothing consumer, gluttenous and hairy.

And here is Babilas: 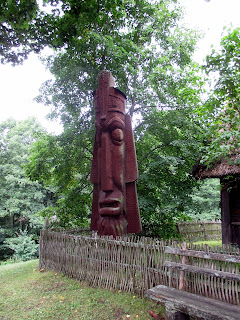 There was reverence for the colony in the hive and they were called in the Lithuanian language the family.  This is still how beekeepers refer to the colony.  The beekeeper at the Nine Honey Apiary that we visited kept talking about the family in each hive.  The queen was called in Lithuanian, the mother - motina or motinella (little mother). 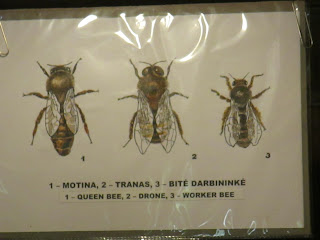 Here is a great write-up about how the bee museum guide describes the bee/human relationship.

At our candle-making workshop (photos in another post), the guide told us that the beekeeper was revered in Lithuanian society at the same level as the priest.  People removed their hats when they saw the beekeeper.  In a community, if there was a need, the beekeeper often sat as judge over disputes.

When the bees would swarm, the beekeepers followed the swarms and made friends with the people on whose land the swarms took up residence.  Sometimes marriages were made through following the swarm.  Even today, although people in Lithuania may not realize the origin of the word, best friends are called bičiulis - which is a derivative of the word for bee: bite - and means dear fellow beekeeper.  Simona, the tour director, wrote us just yesterday with the emails for the beekeepers whom we visited and suggested that we might become “biciuliai” with them.

The Lithuanians sold stones of wax that each weighed 16 kilos all through Europe.  The purchasers needed the wax to make cannons and bells, using the lost wax process.  Lithuania was the biggest producer of wax and honey in all of Europe.

Side note:  We didn't learn much Lithuanian while we were there, but our guide, Lukas, taught us to count to ten.  We also learned and said a lot, the Lithuanian word for thank you that sounds like "Achoo."  The other person responds, "Brashom," which often to me sounded like "Bless You."  So we went around saying Achoo and receiving Bless You throughout our journey!