What a strange honey year!  After two years of drought, now we have so much rain in Atlanta that it has hurt the bees.  Many hives were unable to put up enough stores for winter and it's prime time for robbing.

Jeff and I keep saying we needed to put the robber screens that Billy Davis uses on our hives.  We put it off and put it off (I am deathly afraid of the staple gun).

While I was in Lithuania, my last hive from the Fatbeeman was robbed out and died.  I think his supplier in south Georgia didn't do well by him this year - one of my packages was the one that had a virgin queen at our Chastain site and the package I installed at home never did well.  They were just limping along, and were easy victims for robbers.  The ground under the hive was covered with wax shards and dead bees on the bottom board.  In a way, if robbers were going to pick one of my hives to destroy, that was the best one.

So Jeff and I put Billy Davis robber screens on almost all of our hives last weekend.  The hive below is the Northlake Mall Swarm.  Billy says for the screen to be effective the hive entrance must be about four inches from the edge of the screen.  This hive has an entrance reducer on it (as do all my hives this year) and the opening is under the bees clustered on the screen. 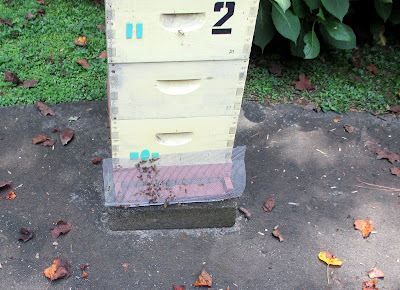 At first the bees are really confused.  How to get to Mama?  They aim for the entrance but that isn't working so they try the upper part of the hive to see if an entrance has materialized up there. 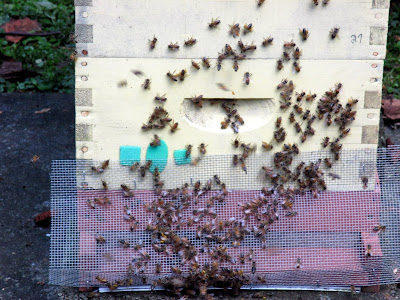 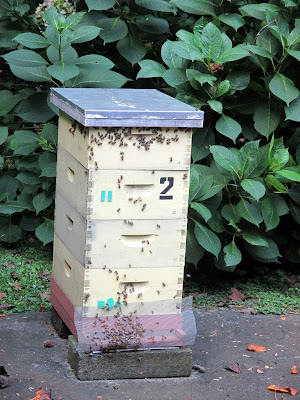 But after a week, the bees have gotten it figured out.  They've been going in the side and bearding under the robber screen (and on top of it!)

Today at 4:30 - typical time for orientation - there was a frantic energy around this particular hive.  I'm not usually home at this time.  I do have breaks in my day, but my busiest time at the office is from about 2 - 7 at night, so I miss orientation.  Consequently I haven't really seen bees orient since we put the robber screens on the hives.

The other hives in my backyard were orienting at 4:30 and they didn't look as frantic as the Northlake hive.  The bees outside the hive were buzzing angrily.  Now, I've seen robbing and it's frantic, but you also see bees actively fighting with each other and falling to the ground; you see dead bees in front of the hive; and a growing pile of wax accumulates under the hive from wax cappings.

But this hive has a closed screened bottom board, so I couldn't see wax cappings.  And although there were not dead bees, the buzz was angry and loud. 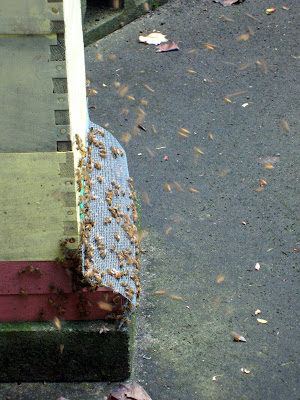 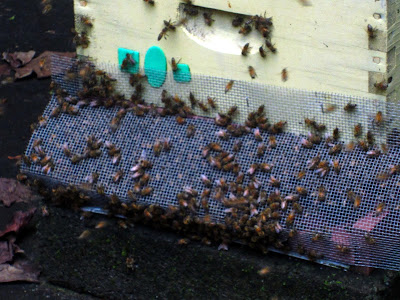 So just to be safe, I threw a wet sheet over the hive, covering the side entrances and waited it out.  I left the front open since there was no entry there and I could monitor the bee population and activity. 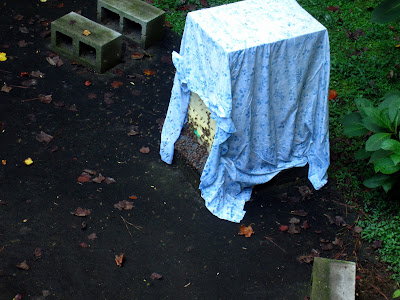 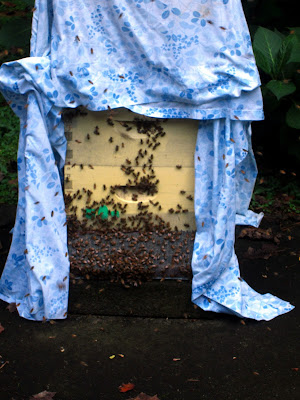 Of course, if this were orientation and not robbing, now the hive bees also don't have access to the hive.

Around 6:30, the activity was back to normal. 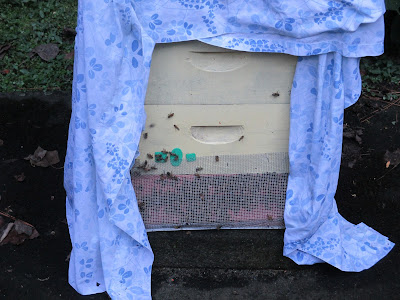 In robbing the robber bees keep trying to access the entry of the hive because they smell the honey.  The hive bees go for the pheromone of the queen so they will search different ways to get to the queen.  But typically robber bees just focus on the entrance.

I don't know but I felt good about having the robber screen on the hive.   Thanks, Billy.

Maybe tomorrow I'll pull the block to the screened bottom board out and see if there are tons of wax shards there.