Crisis of Confidence with Apologies to Mo Willems

My bees and I are not having a great year.

Today I had electricians at my house so I was home more than usual during the work day.  I came home at 2 to see what progress was being made (turns out my whole house needed to be appropriately grounding so they put copper posts into the ground and ran wire to water pipes and put a surge protector on the whole house).

I glanced out into the bee yard and this is what I saw: 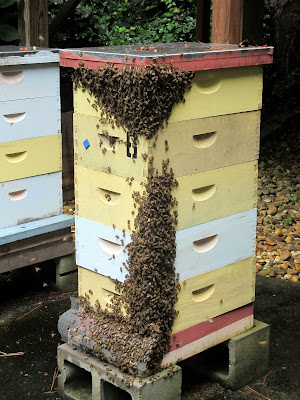 What's going on?  It couldn't be a beard - the other hives weren't bearding and rain was threatening.  Maybe they were absconding?   This is my best hive - the swarm hive from Patty.  It has done great this year and now it looks like they were leaving.

At 2:45 when I had to be back at my office at 3, I donned my bee veil and jacket, lit my smoker and took a quick look in to see if there were any bees or honey in the hive. 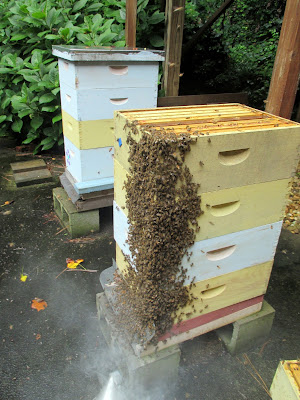 You can see the wet concrete from the rain.  And you can see that there are no bees to speak of in the hive.  I panicked.  Why are they going?

I love the Mo Willems books and one of them is called I am Going.    I felt so like Gerald (the elephant in the story) today.

Gerald does not understand why Piggie is leaving and he says,
"WAIT!
Go later!
Go tomorrow!
Go next week!
Go next month!
GO NEXT YEAR!!!"

But Piggie replies, "I am going now."

That's exactly how I felt....thank you, Mo.  So I opened up the hive and looked deeper into it.  It was full of honey I haven't harvested yet because the year has been so bad and I don't want them to be without stores.  Usually when bees abscond, they take whatever stores are in the hive with them, so this doesn't make sense - lots of honey, no bees.

When I put it back together, the bees were still outside.  I wanted to cry.  Instead as the thunder and rain began, I covered the hive, bees and all with the wet sheet I used on another hive being robbed yesterday and went back to the office. 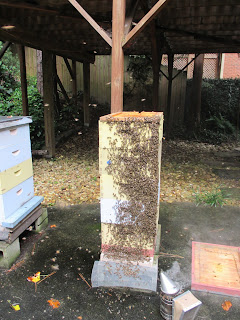 When I returned at the end of the day, amidst more thunder, this is what I found under the sheet: 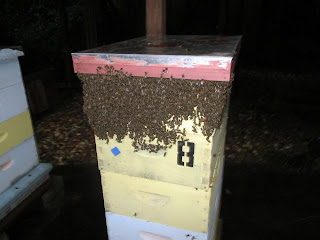 At 8:30 when the hive looked like it does in the last photo, I started thinking the queen was outside the hive in this huge cluster.  So I treated it like a swarm and put them into a box and shook them back into the hive.  They'll probably leave tomorrow.  I feel totally disheartened and want to scream. 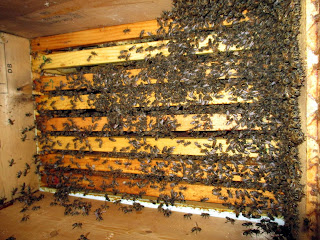 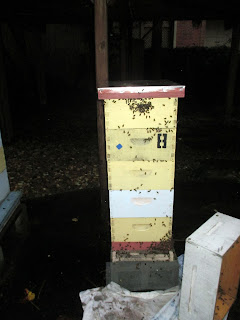 And as per Mo Willems, now I want to say:

But what I know is that I am not in charge.

I will feel defeated if they fly off tomorrow.  As I usually do, I will probably lick my wounds and keep on keeping on, but it won't feel good.